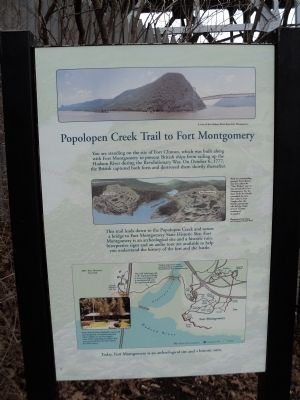 You are standing on the site of Fort Clinton, which was built along with Fort Montgomery to prevent British ships from sailing up the Hudson River during the Revolutionary War. On October 6, 1777, the British captured both forts and destroyed them shortly thereafter.

This trail leads down to the Popolopen Creek and across a bridge to Fort Montgomery State Historical Site. Fort Montgomery is an archeological site and a historic ruin. Interpretive signs and an audio tour are available to help you understand the history of the fort and the battle.

Topics. This historical marker is listed in this topic list: War, US Revolutionary. A significant historical month for this entry is October 1930.

Location. 41° 19.178′ N, 73° 59.239′ W. Marker is in Bear Mountain, New York, in Rockland County. Marker can be reached from New York State Route 9 W, on the right when traveling north. Marker is located on a walking trail through the zoo at Bear Mountain State Park. Touch for map. Marker is in this post office area: Bear Mountain NY 10911, United States of America. Touch for directions.

Other nearby markers. At least 8 other markers are within walking distance of this marker. Bear Mountain Bridge (within shouting distance 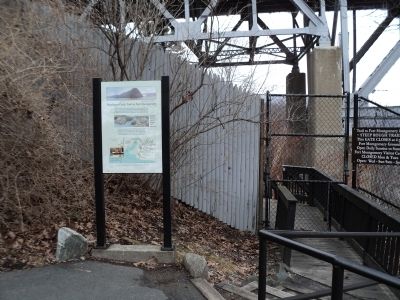 More about this marker. The top of the marker contains a recent photograph depicting “A view of the Hudson River from Fort Montgomery.”
Below this is an illustration of Forts Clinton and Montgomery by Jack Mead. It has a caption of “Built on commanding ground, Fort Clinton was first called the ‘New Works,’ since it was started after Fort Montgomery. For the short while the British controlled the fort, they called it Fort Vaughn after the British commander who led the attack on Fort Clinton resulting in its capture.”
The bottom of the marker features a map of the Fort Clinton and Fort Montgomery showing the Trailside Museums and Zoo; the trail and modern suspension bridge; and the exhibits at Fort Montgomery. This has the caption “Today, Fort Montgomery is an archeological site and a historic ruin.”
The marker also includes a photograph with a caption of “Fort Clinton’s Outer Redoubt is preserved and interpreted at Trailside Museums where exhibits on the fort display some of the archeological artifacts that were recovered from the forts during the 20th century.” 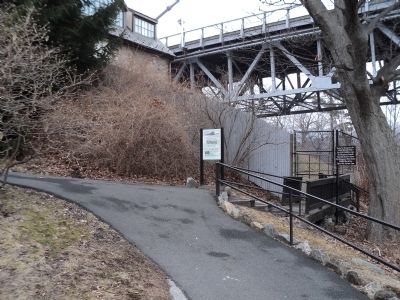 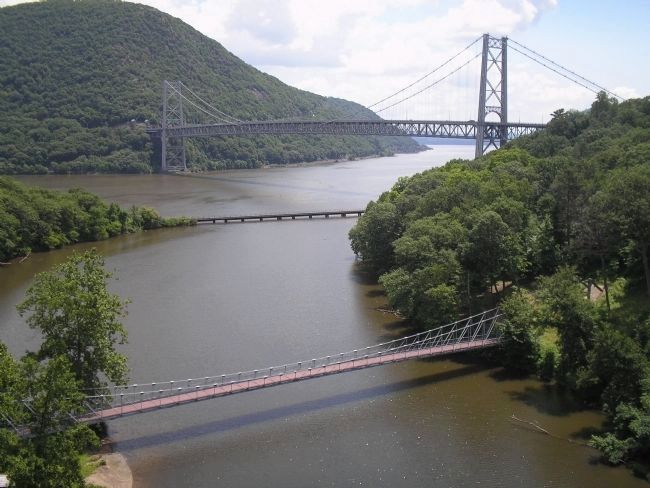