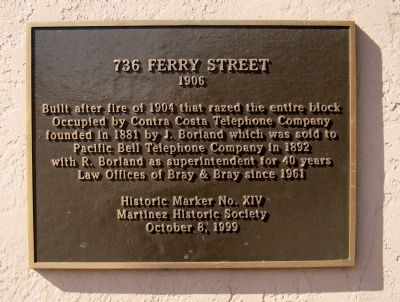 Photographed By Andrew Ruppenstein, March 18, 2012
1. 736 Ferry Street Marker
Inscription.
736 Ferry Street. , Built after the Fire of 1904 that consumed the entire block , Occupied in 1881 by Contra Costa Telephone Company , founded in 1881 by J. Borland which was sold to Pacific Bell Telephone Company in 1892 , with R. Borland as superintendent for 40 years , Law offices of Bray and Bray since 1961, Historic Marker No. XIV , Martinez Historical Society , October 8, 1999 , . This historical marker was erected in 1999 by Martinez Historical Society. It is in Martinez in Contra Costa County California

Topics. This historical marker is listed in these topic lists: Communications • Industry & Commerce. A significant historical month for this entry is October 1765.

Location. 38° 1.033′ N, 122° 8.125′ W. Marker is in Martinez, California, in Contra Costa County. Marker is at the intersection of Ferry Street and Ward Street, on the left when traveling north on Ferry Street. Touch for map. Marker is at or near this postal address: 736 Ferry Street, Martinez CA 94553, United States of America. Touch for directions. 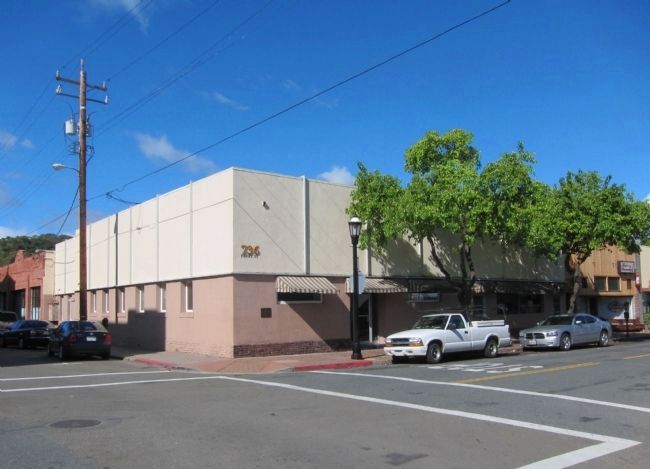 Photographed By Andrew Ruppenstein, March 18, 2012
2. 736 Ferry Street Building and Marker
The marker is visible here mounted to the wall near the corner of the building.