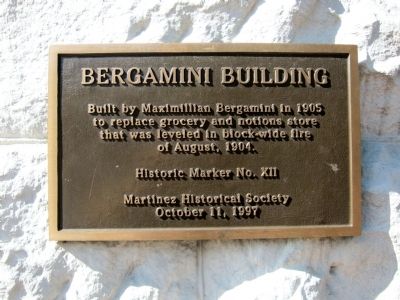 By Andrew Ruppenstein, March 18, 2012
1. Bergamini Building Marker
Inscription.
Bergamini Building. . Built by Maximillian Bergamini in 1905 to replace grocery and notions store that was leveled in block-wide fire of August, 1904.,
Historic Marker XII, Martinez Historical Society October 11, 1997. . This historical marker was erected in 1997 by Martinez Historical Society. It is in Martinez in Contra Costa County California

Built by Maximillian Bergamini in 1905 to replace grocery and notions store that was leveled in block-wide fire of August, 1904.

Topics. This historical marker is listed in this topic list: Industry & Commerce. A significant historical month for this entry is October 1835.

Location. 38° 1.078′ N, 122° 8.159′ W. Marker is in Martinez, California, in Contra Costa County. Marker is on Ferry Street north of Main Street, on the left when traveling north. Touch for map. Marker is at or near this postal address: 624 Ferry Street, Martinez CA 94553, United States of America. Touch for directions. 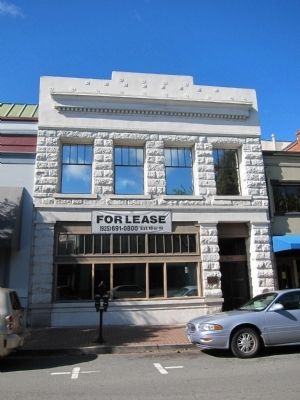 By Andrew Ruppenstein, March 18, 2012
2. Bergamini Building and Marker
The marker is visible here just to the left of the entrance.