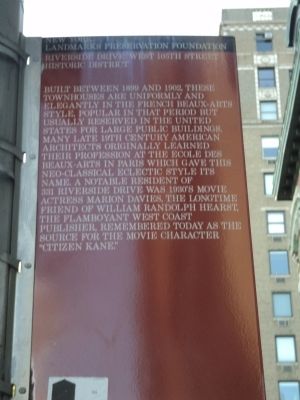 Built between 1899 and 1902, these townhouses are uniformly and elegantly in the French Beaux-Arts style, popular in that period but usually reserved in the United States for large public buildings. Many late 19th century American architects originally learned their profession at the Ecole des Beaux-Arts in Paris which gave this neo-classical eclectic style its name. A notable resident of 331 Riverside Drive was 1930’s movie actress Marion Davies, the longtime friend of William Randolph Hearst, the flamboyant West Coast publisher remembered today as the source for the movie character “Citizen Kane.”

Topics. This historical marker is listed in this topic list: Notable Buildings. A significant historical year for this entry is 1899. 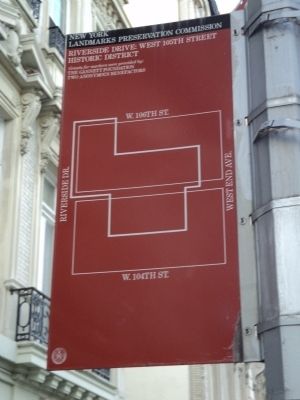 Click or scan to see
this page online
least 8 other markers are within walking distance of this marker. Shinran Shonin (a few steps from this marker); a different marker also named Shinran Shonin (a few steps from this marker); Franz Sigel Statue (within shouting distance of this marker); Gershwin Family Residence (about 700 feet away, measured in a direct line); Victor Herbert (about 700 feet away); Humphrey DeForest Bogart (approx. 0.2 miles away); Birthplace of Norman Rockwell (approx. ¼ mile away); Firemen’s Memorial (approx. ¼ mile away). Touch for a list and map of all markers in New York.

More about this marker. A map of the historic district appears on the back of the marker. 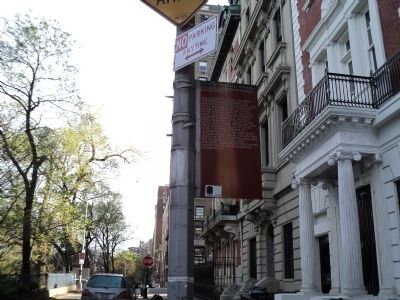 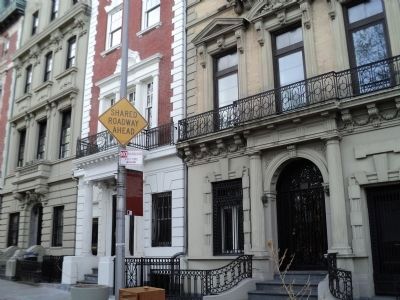 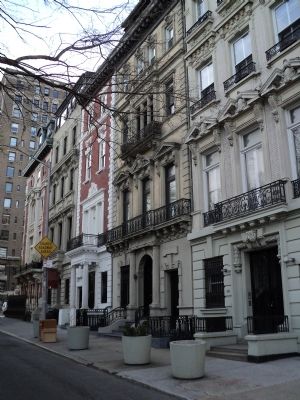