Our Founders in Architectural Heaven 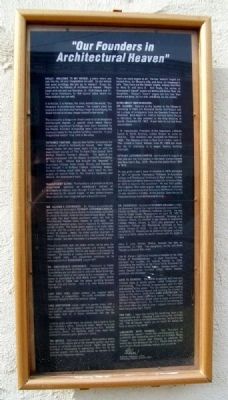 Hello! Welcome to My World, a place where you can, like me, let your imagination run wild. Do you believe that good buildings die and go to heaven? If you do, welcome to my fantasy of Architectural Heaven. Please travel with me and our founders, Dr. Olof Olsson and Dr. Carl Aaron Swensson, to that special place where our imagination can run wild.

It is fiction, it is fantasy, the story behind the mural, "Our Founders in Architectural Heaven." The mural's artist has created a verbal historical fantasy image created in the mural.

The concept is a tongue-in-cheek creation of an imaginary Architectural Heaven, a special place where former historically significant buildings have been recreated by the Master Architect in exacting detail, but substituting precious metals for the earthly building materials. Is your imagination ready? If so, here is the story: 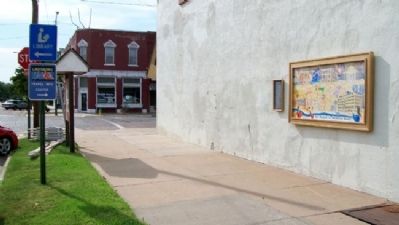 By William Fischer, Jr., August 28, 2011
2. Our Founders in Architectural Heaven Marker and Mural

Click or scan to see
this page online
Messiah. The pastors are greatly impressed with the Master Architect's knowledge of their lives. Olsson had brought the "Messiah" to Augustana College, Rock Island, Illinois, and Swensson had brought it to Bethany College, Lindsborg, Kansas. Another striking detail (that they learn later) the twin angels are named Anna O. for Olsson's daughter, and Anna S., for Swenson's sister.

Magnificent Scene: The Founders are awestruck by the magnificent splendor of Lindsborg's section of Architectural Heaven, even though it had been described in advance by the "escort" angels. In their wildest dreams they could not have imagined such a beautiful scene.

Dr. Olsson's Experience: Dr. Olsson is ecstatically pleased to see once again Bethany Lutheran Church, (lower left) his first prairie church immaculately replicated in precious metals, down to the most minute detail. What on earth had been native sandstone walls, are now in Architectural Heaven many shades of solid gold. The traditional Swedish grass roof is replaced by interwoven strands of gold. The wood doors appear to be solid slabs of silver and the prairie sod wall above the door is now slivers of bronze. Again, he notes another example of detail. The doors do not have a lock, only a stone to keep them closed. But now that stone is a beautiful solid gold. 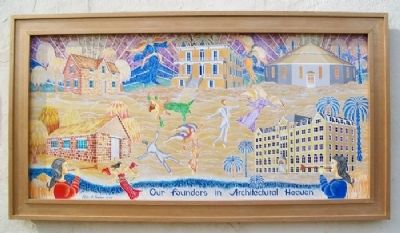 Dr. Swensson's Experience: Swensson is totally amazed by the three-building college campus before him. Superlatives are not adequate to describe these buildings. The minutest detail is not spared in the reincarnation. The scene is dominated by Old Main (lower right), which, when built in 1886, was the tallest building between Kansas City and Denver. Here it is, even more glorious than before.

Ling Auditorium (upper right) is sparkly silver, with a roof of gold. Just wonderful! Another of his dreams, it was built by volunteers to showcase the "Messiah" Chorus. He hopes that all of those volunteers will see the replication.

Looking again at Old Main, he notices that a light is on in the President's office. Asking an angel, "Why?" he is told that Architect L. G. Hallberg is waiting for him. Another surprising detail, the heavenly palm trees have been created in blue and gold, Bethany's colors.

The Angels: Still more surprises! Both pastors notice that all of the angels are of the feminine gender and wear gowns in Lutheran Liturgical colors. Again, the Master Architect is impeccable in welcoming them, for he has selected angels with the same names as women in the Olsson and Swensson families.

There are eight angels in all. The two "matron" angels are named Anna, for Olsson's wife, and Alma, for Swensson's wife. Then there are the "herald" angels, already identified as Anna O. and Anna S. And finally, the names of Swensson's "escort" angels are Bertha and Annie Theo, his daughters. Olsson's "escort" angels tell him that their names are Anna, for his wife, and Britta, for his mother.

More About Our Founders-
Dr. Olsson: Revered as the founder of the Village of Lindsborg in 1869, the Reverend Doctor Olof Olsson had led a group of immigrants from the Swedish Province of Värmland. Born March 31, 1845 to Olof and Britta Olsson in Värmland, he was ordained to the Holy Ministry in Upsala, December 15, 1863. A year later he married Anna Lisa Johnsson.

T. N. Hasselquist, President of the Augustana Lutheran Synod in North America, invited Olsson to come to America. That invitation was accepted on February 3, 1869. The Olssons arrived in New York Harbor, June 8. They arrived in Salina, Kansas, June 25, 1869 and made the trip to Lindsborg in a wagon hauling building materials.

Bethany Lutheran Church was founded in August of that year and the first service in the newly erected church was New Year's Day, 1870. Olsson was pastor from 1869 to 1878.

He was given a year's leave of absence in 1876 and again in 1877 to become Theological Professor at Augustana College and Theological Seminary in Rock Island, Illinois. He selected Carl Aaron Swensson from the Seminary Class of 1879 to become his successor. He was first pastor, first organist, first choir master, first editor in Lindsborg and first Superintendent of Schools in McPherson County. He was elected a member of the Kansas State House of Representatives from McPherson County.

Dr. Swensson: Founder of Bethany College in 1881, the Reverend Doctor Carl Aaron Swensson succeeded Dr. Olsson as Pastor of Bethany Lutheran Church. He was born at Sugar Grove, Pennsylvania on June 25, 1857 to Pastor Jonas and Maria (Blixt) Swensson. Growing up in Andover, Illinois, he enrolled at age sixteen in Augustana College, Paxton, Illinois, in 1873, and graduated at the Augustana College and Theological Seminary in Rock Island, Illinois in 1879. In July of that year he was installed by Dr. Hasselquist as pastor of Bethany Lutheran Church in 1879, where he would remain until his death in 1904.

Like Dr. Olsson, Carl Aaron became a member of the State House of Representatives. A loyal Republican, he stumped the country for several months in 1900, supporting the election of his friend Teddy Roosevelt for Vice-President of the United States. Besides pastor, his many faceted career included author, editor, teacher, politician, and promoter.

Note to Viewers: The mural is painted with two very unusual types of acrylic paints, called "iridescent" and interference". They change in appearance with the light and position of the viewer. You can enhance your viewing experience by moving around and noticing the change in some of the colors, particulary Ling Auditorium, the building in the upper right hand corner. The shimmery effect of the iridescent acrylic paint is really enhanced by the sun hitting the mural. So, if the sun is not shining on the mural when you view it, may I suggest that you come back on a sunny day? Enjoy!

Topics and series. This historical marker is listed in these topic lists: Architecture • Churches & Religion • Education • Settlements & Settlers. In addition, it is included in the Former U.S. Presidents: #26 Theodore Roosevelt series list. A significant historical month for this entry is February 1828.

Location. 38° 34.417′ N, 97° 40.535′ W. Marker is in Lindsborg, Kansas, in McPherson County. Marker is at the intersection of Main Street and Lincoln Street, on the right when traveling north on Main Street. Touch for map. Marker is at or near this postal address: 104 North Main Street, Lindsborg KS 67456, United States of America. Touch for directions.