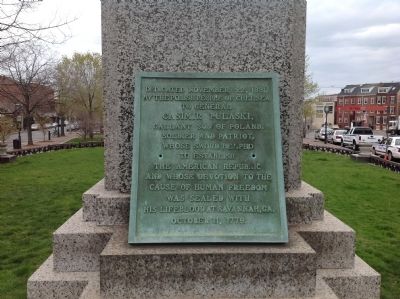 Dedicated November 22, 1931, by the Polish people of Chelsea to General Casimir Pulaski, gallant son of Poland, solider and patriot, whose sword helped to establish the American Republic and whose devotion to the cause of human freedom was sealed with his lifeblood at Savannah, GA. October 11, 1779.

Erected 1931 by The Polish people of Chelsea.

Topics. This historical marker is listed in these topic lists: Patriots & Patriotism • War, US Revolutionary. A significant historical month for this entry is October 1840.

Location. 42° 23.375′ N, 71° 2.361′ W. Marker is in Chelsea, Massachusetts, in Suffolk County. Marker is at the intersection of Park Street and Broadway, in the median on Park Street. Located across from the Police Department. Touch for map. Marker is in this post office area: Chelsea MA 02150, United States of America. Touch for directions. 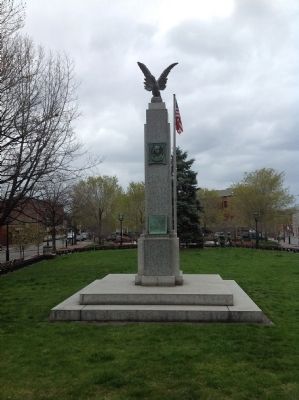