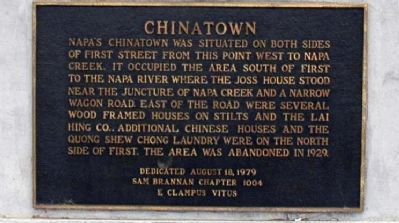 Photographed By Loren Wilson, May 24, 2008
1. Napa's China Town Marker
Inscription.
Napa's China Town, also, Shuck Chan. . Lower Marker:
Napa's China Town.
Napa’s China Town was situated on both sides of First Street from this point west to Napa Creek. It occupied the area south of First to the Napa River where the Joss House stood near the juncture of Napa Creek and a narrow wagon road. East of the road were several wood framed houses on stilts and the Lai Hing Co. Additional Chinese houses and the Quong Shew Chang Laundry were on the north side of First Street. The area was abandoned in 1929., Upper Marker:
Shuck Chan. To honor a leading citizen of Napa. He came here from China in 1898 at the age of three. The owner of Lai Hing Co. He and his wife Lee Kum were the last merchants of Chinatown . This historical marker was erected in 1979 by Sam Brannan Chapter No. 1004, E Clampus Vitus. It is in Napa in Napa County California

Lower Marker:
Napa's China Town
Napa’s China Town was situated on both sides of First Street from this point west to Napa Creek. It occupied the area south of First to the Napa River where the Joss House stood near the juncture of Napa Creek and a narrow wagon road. East of the road were several wood framed houses on stilts and the Lai Hing Co. Additional Chinese houses and the Quong Shew Chang Laundry were on the north side of First Street. The area was abandoned in 1929.

Upper Marker:
Shuck Chan
To honor a leading citizen of Napa. He came here from China in 1898 at the age of three. The owner of Lai Hing Co. He and his wife Lee Kum were the last merchants of Chinatown

Topics and series. This historical marker is listed in this topic list: Settlements & Settlers. In addition, it is included in the E Clampus Vitus series list. A significant historical year for this entry is 1929. 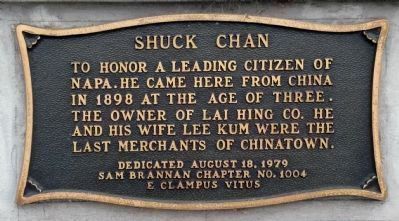 Click or scan to see
this page online
W. Marker is in Napa, California, in Napa County. Marker is on First Street east of Main Street, on the right when traveling east. Plaques are located on the base of a lamp post, at the center of the First Street Bridge, on the south side of the span. Touch for map. Marker is at or near this postal address: 948 First Street, Napa CA 94559, United States of America. Touch for directions.

Additional commentary.
1. Napa's Chinatown
Napa’s Chinatown was founded in 1850 when George Cornwell, a city supervisor and state assemblyman, established Cornwall’s addition which embraced the lots upon which early Chinese settlers built rows of frame structures on high foundations because of frequent flooding of the Napa River. The houses, stores, barbershops, gambling dens, and laundries were crowded together, separated by narrow streets or walkways. The lots were not owned by the Chinese, and 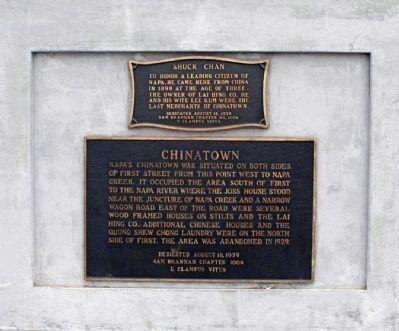 Photographed By Loren Wilson
3. Napa's China Town and Shuck Chan Markers
building was done by lease agreement. Looking on the site now, one must try to envision a triangular shaped piece of land, that at is peak was home to almost 500 people. This mound is now worn flat due to the action of the river and almost nothing remains to remind us of its existence.

At the height of its flourishing times, one could have observed Chinese males with long braided queues wearing straw slippers, and women in neat silk pantaloons and blue felt slippers quietly moving about. The men carried their wares in straw bags attached to the end of a bamboo stick balanced on their shoulders. Caucasian residents of Napa, ever finding the settlement and its people a refreshing attraction, wandered about, shopping for trinkets while others stopping in to try their luck at Chuck-A-Luck or other games of chance. There always seemed to prevail an air of intrigue and mystery throughout the settlement. A favorite pastime of the men was to sit on the riverbank and fish for carp, white fish and cat fish.

This humble village survived two Tong wars but two fires hastened its demise. After the first fire most of Chinatown was rebuilt, but after the second fire in 1900, the population dwindled until in 1930 the last of the Chinese moved and the buildings bulldozed with the idea of civic planners to build a yacht harbor.

While Napa's Chinatown was not the biggest 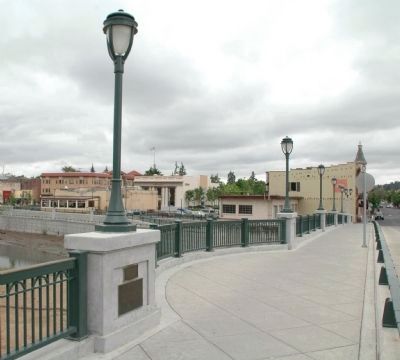 Photographed By Loren Wilson, May 24, 2008
4. Napa's China Town Marker--Shuck Chan Plaque
in Napa County, it was the most prominent. It was the Joss House that set Napa’s Chinatown apart from other settlements in the Napa Valley. The Joss House contained a hand carved altar brought from China in 1860. The temple remained a center of life in Chinatown until it was dismantled.

The residents of Chinatown maintained two large gardens, one on Soscol and the other on Main Street near Clinton. It is unfortunate that when Chinatown was abandoned, Napa lost one of the most charming aspects of its community life.

Jess Dowd, Director, Napa County Historical Society
August 18, 1979
Jess was a member of Sam Brannan and Yerba Buena Chapters of ECV
— Submitted April 16, 2012, by Loren Wilson of Sebastopol, California.
2. Shuck Chan
Born in 1895, he is the third oldest of five sons and one daughter. As a child and youth he helped his family operate the Lai Ring Company, a general store that was among the most prominent of commercial establishment in Chinatown. In 1912 Shuck, a brother, and an uncle opened a Chinese restaurant in San Francisco. It closed in 1915 and Shuck was persuaded to take his culinary talents to Maine to open Chinese restaurants there. Shuck stayed in Maine through ten cold winters until he fell ill in a flu epidemic and was brought 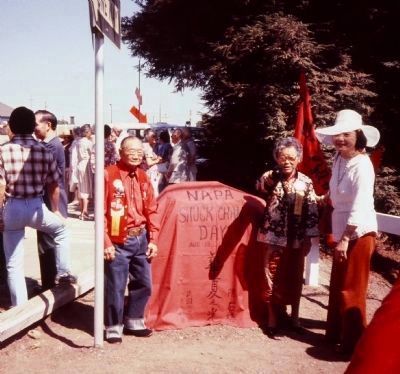 Photographed By Loren Wilson, August 18, 1978
5. Plaque Dedication - 1978
Chuck Chan with his wife and daughter at the dedication.

When the First Street Bridge was replaced with a wider one, the plaque was moved to the center of the span of the new bridge.
back to Napa. Shortly upon his return he went to Watsonville to open a restaurant but was forced to leave because of the terrorizing Tong warfare.

He later opened a grocery store in San Francisco but gave it up because he did not like the line of work. At this point Shuck headed for the Stockton Delta to try his hand in farming. It was the 1925-26 season and that year everybody that farmed lost money.

After Chinatown was bulldozed in 1930 Shuck bought the old Martini Building and moved his family there. The family also operated a restaurant beneath the Napa Opera House and for several years Shuck had worked as a sheepherder and cattleman. He operated a restaurant in Placerville for ten years before returning to Napa.

"Napa is my home" said the former city planning commissioner who had seen Napa's Chinatown, at its largest, a settlement of 500 people through two fires and two Tong wars until 1930 when the last Chinese were removed to make room for a yacht harbor.

Shuck, at the time of the plaque dedication was the only individual left with a direct connection to Napa’s Chinatown. Shuck Chan always showed a keen interest in California history, also Shuck was a charter member of the Chinese Historical Society of San Francisco and for over twenty years was an active Clamper.

An altar that was a sacred fixture in the Joss House of Napa’s old and picturesque Chinatown is now a permanent and historically valued museum piece on exhibition at the headquarters of the Chinese Historical Society thanks to Shuck Chan. The altar was originally brought to America by Shuck Chan’s father from Canton, China in 1860.

Shuck had removed the altar from the Joss House here when the modest church edifice was dismantled after a second destructive fire had practically wiped out the quaint Chinese settlement. Shuck had kept the altar stowed away securely and with due reverence until the newly established museum offered an appropriate place for its permanent placement.