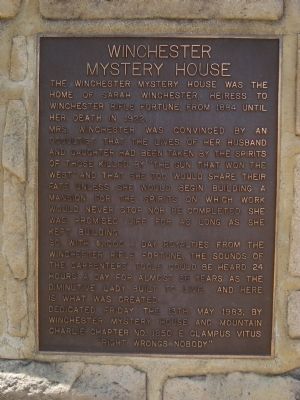 The Winchester Mystery House was the home of Sarah Winchester, heiress to [the] Winchester Rifle fortune, from 1884 until her death in 1922.

Mrs. Winchester was convinced by an occultist that the lives of her husband and daughter had been taken by the spirits of those killed by “The Gun that Won the West” and that she too would share their fate unless she would begin building a mansion for the spirits on which work would never stop nor be completed. She was promised life for as long as she kept building.

So, with $1,000 a day royalties from the Winchester Rifle fortune, the sounds of the carpenters’ tools could be heard 24 hours a day for almost 38 years as the diminutive lady built to live. And here is what was created.

Topics and series. This historical marker is listed in this topic list: Notable Buildings. In addition, it is included in the E Clampus Vitus series list. A significant historical year for this entry is 1884. 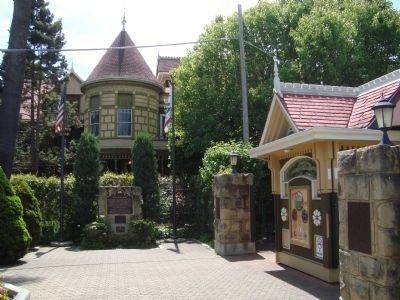 Photographed By Barry Swackhamer, April 17, 2012
2. Winchester Mystery House Marker
The marker is to the right of the ticket booth.

More about this marker. To keep with the tradition, this marker was dedicated on Friday the 13th.

Regarding Winchester Mystery House. Sarah Winchester believed she was creating a place for those killed by Winchester rifles to rest. Sarah had carpenters working on the house 24 hours a day, 7 days a week, for as long as she lived. She had a fascination for the number 13. Windows had 13 panes of glass, and she had the ornate brass chandelier in the dining room modified with a place for a 13th lamp. The mansion and grounds are open to the public year round. 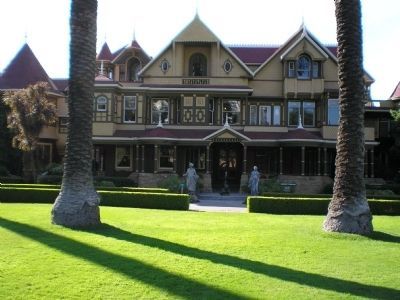