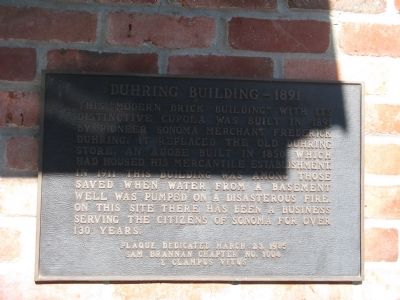 By Syd Whittle, January 10, 2009
1. Duhring Building – 1891 Marker
Inscription.
Duhring Building – 1891. . This “modern brick building” with its distinctive cupola was built in 1891 by pioneer Sonoma merchant Frederick Duhring. It replaced the old Duhring Store, an adobe built in 1850 which had housed his mercantile established. In 1911 this building was among those saved when water from a basement well was pumped on a disasterous fire. On this site there has been a business serving the citizens of Sonoma for over 130 years. . This historical marker was erected in 1985 by Sam Brannan Chapter #1004 E Clampus Vitus. It is in Sonoma in Sonoma County California

This “modern brick building” with its distinctive cupola was built in 1891 by pioneer Sonoma merchant Frederick Duhring. It replaced the old Duhring Store, an adobe built in 1850 which had housed his mercantile established. In 1911 this building was among those saved when water from a basement well was pumped on a disasterous fire. On this site there has been a business serving the citizens of Sonoma for over 130 years.

Topics and series. This historical marker is listed in these topic lists: Architecture • Industry & Commerce • Settlements & Settlers. In addition, it is included in the E Clampus Vitus series list.

Location. 38° 17.511′ N, 122° 27.393′ W. Marker is in Sonoma, California, in Sonoma County. Marker can be reached from East Napa Street near First Street East. Address of building is 498 First Street East, however marker is located on the East Napa Street side of building. Touch for map. Marker is in this post office area: Sonoma CA 95476, United States of America. Touch for directions. 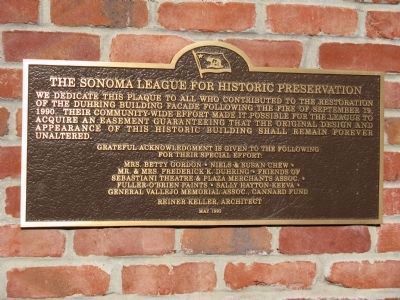 By Syd Whittle, January 10, 2009
2. A Second Marker at this Site
THE SONOMA LEAGUE FOR HISTORICAL PRESERVATION
We dedicate this plaque to all who contributed to the restoration of the Duhing Building Facade following the fire of September 19, 1990. Their community-wide effort made it possible for the League to acquire an easement guaranteeing that the original design and appearance of this historic building shall remain forever unaltered.
Grateful acknowledgment is given to the following:
for their special effort
Mrs. Betty Gordon * Neils & Susan Chew *
Mr. & Mrs. Frederick K. Duhring * Friends of
Sebastiani Theater & Plaza Merchants Assoc. *
Fuller O'Brien Paints * Sally Hayton-Keeva *
General Vallejo Memorial Assoc. * Cannard Fund
Reiner Keller, Architect
May 1992
markers are within walking distance of this marker. The Poppe-Parmelee Building (within shouting distance of this marker); Sonoma Valley Women’s Club (about 500 feet away, measured in a direct line); Raising of the Bear Flag Monument (about 500 feet away); Vasquez House (about 500 feet away); Nash-Patton Adobe (about 600 feet away); Site of Union Hotel and Union Hall (about 600 feet away); Blue Wing Inn (about 700 feet away); Sonoma Barracks (about 700 feet away). Touch for a list and map of all markers in Sonoma.

Additional comments.
1. Duhring General Store
An early morning fire in October 1990 completely destroyed the original building on this site. Through the efforts of the Sonoma League for Historic Preservation and donations from the citizens of Sonoma, the façade, using the original bricks, was completely restored to its former appearance.

From about 1849, an adobe building was on this site. It was purchased by Frederick Duhring in 1879, and operated as the Duhring Clothing Store and agency for Wells Fargo and Company. In 1891 he built the brick building (that was destroyed by fire nearly a hundred years later) and operated it as a general store.
Designed by A.C. Lutgens, who also designed City Hall, the original building, as does its replacement, features a short tower a the corner 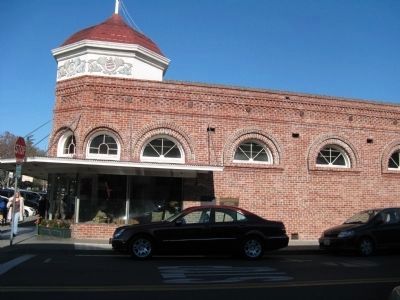 By Syd Whittle, January 10, 2009
3. Duhring Building
Markers are to the right of the window
with conical roof and pressed metal to resemble shingles with a flag pole on top.
After the building burned, all of the bricks were taken to the City Corporation Yard where the mortar was removed, by hand, by members of the Sonoma League for Historic Preservation so the same bricks could be used when the building was restored.
Source: Sonoma Walking Tour Brochure
— Submitted January 14, 2009.
2. Additional Information Regarding the Marker Dedication
Carl Schoelles was Noble Grand Humbug when this plaque was dedicated. Plaque wording by Loren A. Wilson
— Submitted April 22, 2012, by Loren Wilson of Sebastopol, California. 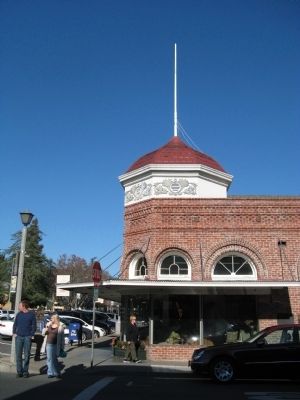 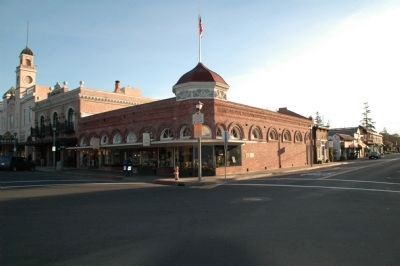 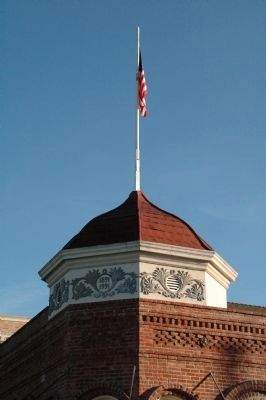