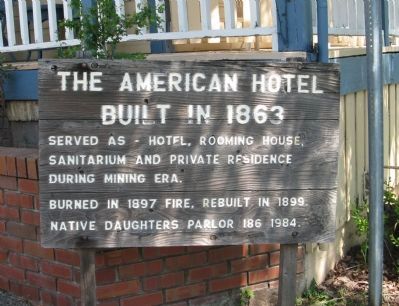 Photographed By Syd Whittle, April 24, 2012
1. The American Hotel Marker
Inscription.
The American Hotel. Built in 1863. , Served as – hotel, rooming house, sanitarium and private residence during mining era. , Burned in 1897 fire, rebuilt in 1899. . This historical marker was erected in 1984 by Native Daughters of the Golden West, Parlor No, 186. It is in Georgetown in El Dorado County California

Topics and series. This historical marker is listed in these topic lists: Industry & Commerce • Notable Buildings. In addition, it is included in the Native Sons/Daughters of the Golden West series list. A significant historical year for this entry is 1897. 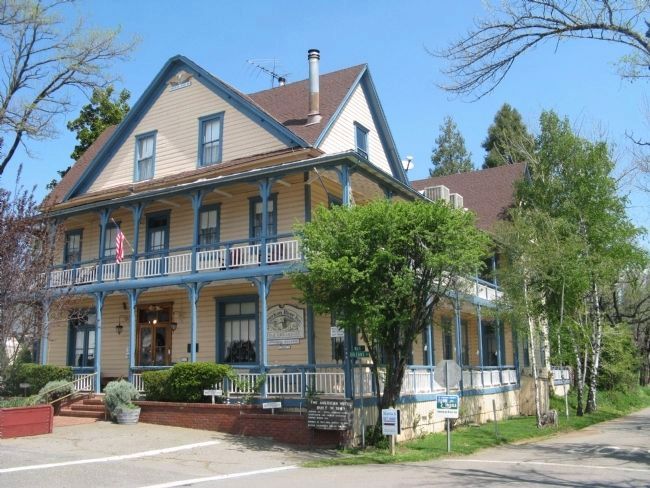 Regarding The American Hotel. The inn is currently operated as the American River Inn - Bed & Breakfast. There are 13 guest rooms and suites, decorated in Country Victorian.

Additional commentary.
1. The American Hotel
The Round Tent Saloon and gambling establishment on this corner was replaced by the Sharp residence, soon to be converted to the Orleans House. In 1862, Sam Currier bought the hotel and renamed it the American House.
Raymond Bundshuh and George Heuser changed the name to the American Hotel in 1869. Heuser’s widow married Bundshuh, and continued to operate the hotel until after his death.
In April 1899, flames in the hotel chimney spread throughout the hotel and several adjacent buildings. Mrs. Brundshuh immediately rebuilt and reopened for business in December 1899. After her death in 1900 the building remained vacant for several years. In 1916 it was converted to a tuberculosis sanitarium, in 1920 it became a farm bureau hall, and thirteen years later converted back to a hotel.
It later became a private residence, and then it 1973 it was restored and converted to a bed & breakfast.
Source: Georgetown Waking Tour Brochure
— Submitted April 26, 2012.
Credits. This page was last revised on July 31, 2018. It was originally submitted on April 26, 2012, by Syd Whittle of Mesa, Arizona. This page has been viewed 542 times since then and 20 times this year. Last updated on April 26, 2012, by Keith S Smith of West Chester, Pennsylvania. Photos:   1, 2. submitted on April 26, 2012, by Syd Whittle of Mesa, Arizona.
Share this page.