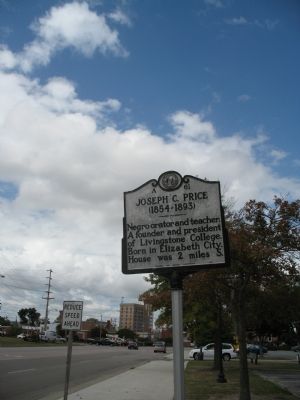 Negro orator and teacher. A founder and president of Livingstone College. Born in Elizabeth City. House was 2 miles S.

Erected by Archives and Highway Departments. (Marker Number A-61.)

Topics and series. This historical marker is listed in these topic lists: African Americans • Education. In addition, it is included in the African Methodist Episcopal Zion (AME Zion) Church, and the Historically Black Colleges and Universities series lists.

Regarding Joseph C. Price. Joseph C. Price was born in Elizabeth City, the child of a free mother and a slave father. When his natural father was sold and sent away, his mother, Emily Pailin, married David Price. In 1863 the Prices moved to New Bern where Joseph was enrolled in St. Andrew’s School, opened there by James Walter Hood, later the bishop of the A.M.E. Zion Church. Young Price, though late in beginning his formal education, made exceptional progress. After St. Andrew’s, he attended Cyprian Episcopal School and Lowell Normal School, where he gained the skills needed to become an educator. After completing his own education, he taught in Wilson, becoming the principal at a school there in 1871. In 1873, Price enrolled at Shaw University to study law, but shortly thereafter transferred to Lincoln University (Oxford, Pennsylvania) to prepare for the ministry in the A.M.E. Zion Church. He was valedictorian of his class at Lincoln in 1879 and stayed on at the school to complete the three-year seminary course in only two years.

In 1881 Price distinguished himself as an orator, speaking on prohibition and later on education and race issues. On a speaking tour in Europe, Price raised nearly $10,000 to establish a college for blacks in North Carolina. With the additional support of Salisbury residents, he became president of Zion Wesley College in 1882. The name was changed to Livingstone College in 1885. Price gained national attention during his tenure at the college. He was offered a variety of prestigious positions, but chose to remain at Livingstone. In 1890 Price was elected president of the Afro-American League and the National Equal Rights Association.

Price’s promising life ended abruptly October 25, 1893, after he contracted Bright’s disease, a disease affecting the kidneys. He was buried in a mausoleum on the campus of Livingstone College. He was survived by his wife, the former Jennie Smallwood, and their five children, one of whom was yet unborn at the time of her father’s death.