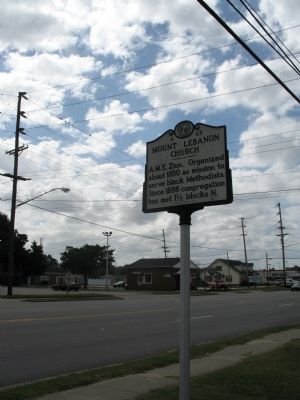 By Laura Troy, October 1, 2007
1. Mount Lebanon Church Marker
Inscription.
Mount Lebanon Church. . A.M.E. Zion. Organized about 1850 as mission to serve black Methodists. Since 1856 congregation has met 1½ blocks N. . This historical marker was erected in 1998 by Division of Archives and History. It is in Elizabeth City in Pasquotank County North Carolina

A.M.E. Zion. Organized about 1850 as mission to serve black Methodists. Since 1856 congregation has met 1½ blocks N.

Erected 1998 by Division of Archives and History. (Marker Number A-43.)

Topics and series. This historical marker is listed in these topic lists: African Americans • Churches & Religion. In addition, it is included in the African Methodist Episcopal Zion (AME Zion) Church ⛪ series list. A significant historical year for this entry is 1850. 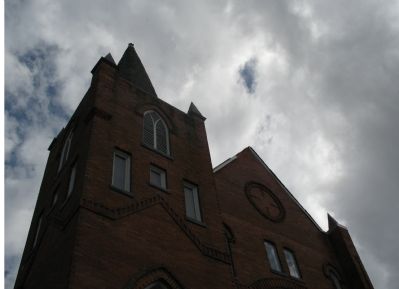 Regarding Mount Lebanon Church. In his survey of the historic properties of Elizabeth City, historian Thomas R. Butchko called present Mount Lebanon A.M.E. Zion Church the “oldest known black congregation in the Albemarle area.” Organization of black churches in antebellum North Carolina was not unknown; few have survived to the present day. “African Episcopal” missions were in place in New Bern and Fayetteville by 1833. “African Methodists” in New Bern are said to have sought a separate house of worship in 1802 (it apparently went unbuilt). Methodists were the most active in encouraging worship by slaves and free blacks, establishing missions to serve African Americans throughout eastern North Carolina. State law in 1831 made it unlawful for “any free Negro, slave or free person of color to preach or exhort in public.” Thereafter, during the antebellum era, white ministers served black worshippers. 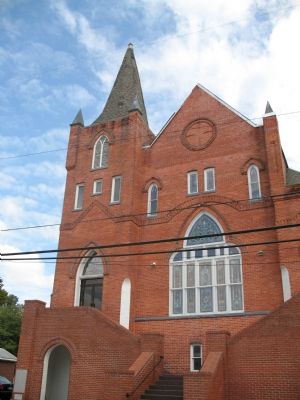 Mount Lebanon claims to have been organized in 1850 but the earliest deed record is 1856 (the deed was not recorded until 1886). The congregation originated within the basement of the white Methodist church in Elizabeth City, established in 1828. Around mid-century these Methodists organized a separate “Colored Mission,” which in 1855 reported 273 members, according to the minutes of the conference. The Reverend Joe Turner preached to the black Methodists at the old and new locations.

Trustees of the white church in 1856 purchased the lot on African (present Culpepper) Street and constructed a frame house of worship where the present church stands. By the Civil War the church had the largest membership of all the city’s churches. Soon thereafter the church affiliated with the A.M.E. Zion denomination. Members worshipped in the frame building until the present brick, Gothic Revival style, edifice was erected on the site of the former parsonage in 1905. From Mount Lebanon originated several of the city’s other black churches. Joseph C. Price, founder of Livingstone College, was baptized at and affiliated with Mount Lebanon until his family moved to New Bern.