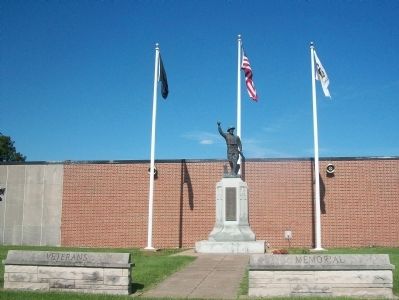 Stone marker. , Dedicated to Those of world war two Korean Vietnam Wars , In solemn salute to those thousands of our comrades, brave men that they were, for whom there will be no homecoming ever. . This memorial was erected by East End Improvement Association. It is in Alton in Madison County Illinois

Plaque 1.
This memorial is erected to commemorate the patriotism and devotion of our citizens who answered our country's call and served in the World War.
Plaque 2.
Let us have faith in that right makes might, and in that faith, let us to the end dare to do our duty as we understand it.
Plaque 3.
Cambrai • Somme Defensive • Lys • Ainse • Montdidier-Noyon • Champagne-Marne • Aisne-Marne • Somme Offensive • Oise-Ainse • Ypress-Lys • St. Mihiel • Meuse-Argonne • Vittorio-Veneto 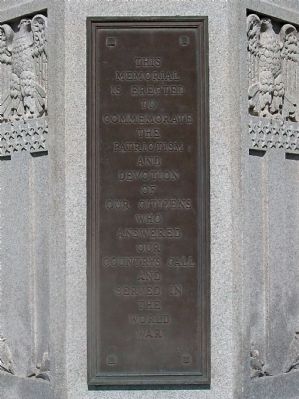 Click or scan to see
this page online
• Cary Waples

Stone marker.
Dedicated to Those of WWII Korean Vietnam Wars
In solemn salute to those thousands of our comrades, brave men that they were, for whom there will be no homecoming ever.

Topics and series. This historical marker and memorial is listed in these topic lists: Military • War, World I. In addition, it is included in the Spirit of the American Doughboy - E. M. Viquesney series list.

More about this memorial. This memorial was originally located at the intersection of Henry and Fifth streets. The monument was moved to Riverside Park in 1942 and later moved to the VFW grounds on North Alby. It was at the VFW location were the stone marker for veterans of WWII, Korea and Vietnam was added.

The statue atop the pedestal is a replication of E. M. Viquesney’s "Spirit of The American Doughboy". 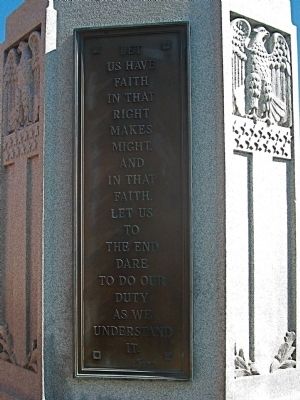 Photographed By Mike Camero, May 13, 2012
3. Veterans Memorial - Plaque 2
1. Alton, Illinois, Doughboy::. This website also contains information on all known Viquesney Doughboys (there are about 140 of them throughout the U.S.); however the link refers only to the one at Alton, Illinois. (Submitted on May 21, 2012, by Al Wolf of Veedersburg, Indiana.)

2. Who are "Doughboy" Searchers??::. This web site gives more detailed history, photos, and items. Also examples of other Viquesney works of Historical Art. (Submitted on May 21, 2012, by Al Wolf of Veedersburg, Indiana.) 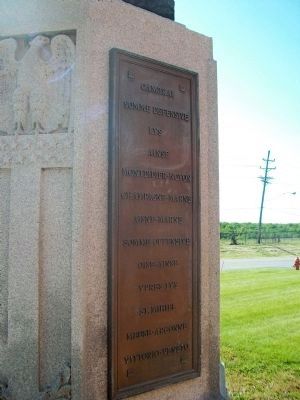 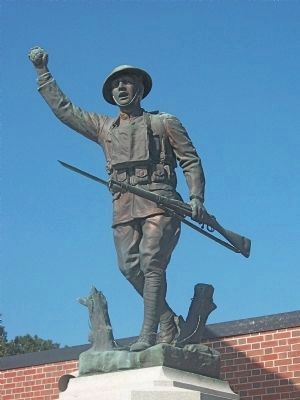