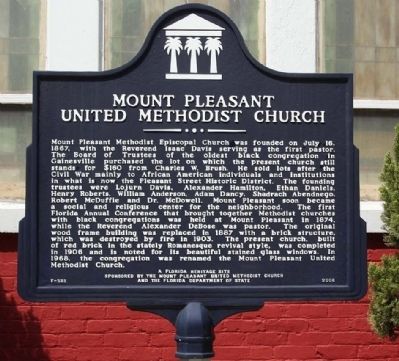 Mount Pleasant Methodist Episcopal Church was founded on July 16, 1867, with the Reverend Isaac Davis serving as the first pastor. The Board of Trustees of the oldest black congregation in Gainesville purchased the lot on which the present church still stands for $160 from Charles W. Brush. He sold lots after the Civil War mainly to African American individuals and institutions in what is now the Pleasant Street Historic District. The founding trustees were Lojurn Davis, Alexander Hamilton, Ethan Daniels, Henry Roberts, William Anderson, Adam Dancy, Shadrach Abendnego, Robert McDuffie and Dr. McDowell. Mount Pleasant soon became a social and religious center for the neighborhood. The first Florida Annual Conference that brought together Methodist churches with black congregations was held at Mount Pleasant in 1874, while the Reverend Alexander DeBose was pastor. The original wood frame building was replaced in 1887 with a brick structure, which was destroyed by fire in 1903. The present church, built of red brick in the stately Romanesque revival style, was completed in 1906 and is noted for its beautiful stained glass windows. In 1968, the congregation 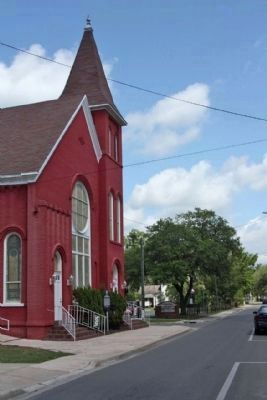 Click or scan to see
this page online
was renamed the Mount Pleasant United Methodist Church.

Topics. This historical marker is listed in these topic lists: African Americans • Churches & Religion. A significant historical month for this entry is July 1808. 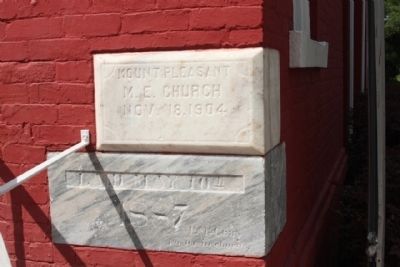 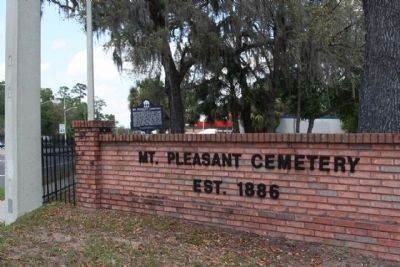