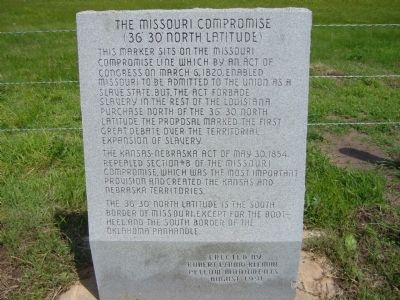 This marker sits on the Missouri Compromise line which by an Act of Congress on March 6, 1820, enabled Missouri to be admitted to the Union as a Slave State. But, the Act forbade slavery in the rest of the Louisiana Purchase North of the 36° 30' North Latitude. The proposal marked the first great debate over the Territorial Expansion of slavery.
The Kansas-Nebraska Act of May 30, 1854, repealed section #8 of the Missouri Compromise, which was the most important provision and created the Kansas and Nebraska Territories.
The 36° 30' North Latitude is the south border of Missouri, except for the Boot-heel, and the south border of the Oklahoma Panhandle.

Topics. This historical marker is listed in these topic lists: African Americans • Government & Politics. A significant historical month for this entry is March 1943. 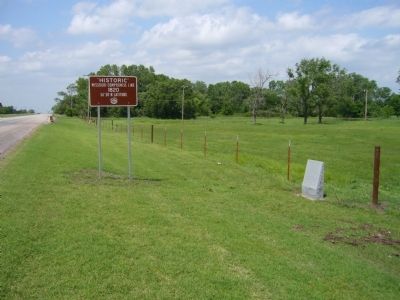 Photographed By Bill Kirchner, May 1, 2012
2. The Missouri Compromise Marker
Marker is on the right in photo.

Click or scan to see
this page online
U.S. 60. Marker is about 2 miles north of Enid. Touch for map. Marker is in this post office area: Enid OK 73701, United States of America. Touch for directions.

Other nearby markers. At least 3 other markers are within 11 miles of this marker, measured as the crow flies. The Chisholm Trail (approx. 2½ miles away); Government Springs (approx. 7.4 miles away); Jesse Chisholm (approx. 10.3 miles away). 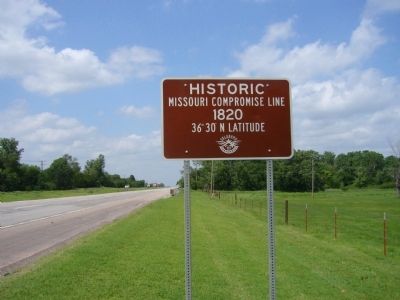