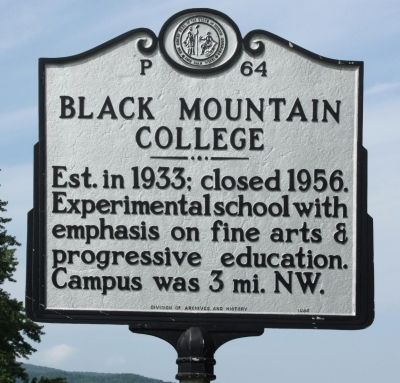 Photographed By Mike Stroud, May 19, 2012
1. Black Mountain College Marker
Inscription.
Black Mountain College. . Est. in 1933; closed 1956. Experimental school with emphasis on fine arts and progressive education. Campus was 3 mi. NW. . This historical marker was erected in 1986 by Division of Archives and History. It is in Black Mountain in Buncombe County North Carolina

Erected 1986 by Division of Archives and History. (Marker Number P-64.)

Topics and series. This historical marker is listed in these topic lists: Arts, Letters, Music • Education. In addition, it is included in the North Carolina Division of Archives and History series list. A significant historical year for this entry is 1933. 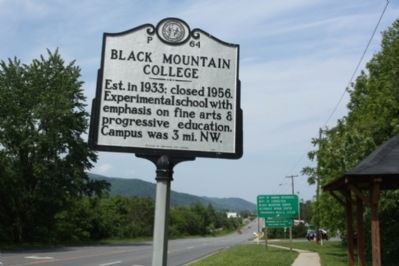 Regarding Black Mountain College. Black Mountain College was established in 1933 by a group of Rollins College faculty, disgruntled over the firing of Professor John Andrews Rice by the college president. Led by Josef Albers, the Black Mountain faculty included several scholars forced to leave Europe during the 1930s. The new school was incorporated on August 19, 1933, and, according to the first catalog, was founded “in order to provide a place where free use might be made of tested and proved methods of education and new methods tried in a purely experimental spirit. . .”
The institution was unconventional by almost every standard. As an experimental college that served as an
alternative to traditional education, it was one of the first schools in the nation to create an educational plan embodying the principles of progressive education. There was even an attempt to implement an organization plan giving the faculty full legal control of the school. One of the major tenets of the school’s plan was to elevate the fine arts 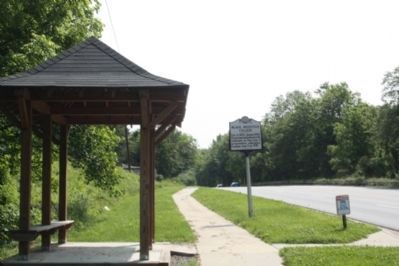 Photographed By Mike Stroud, May 19, 2012
3. Black Mountain College Marker, looking west along W State Street (US 70)
to full curricular status.
Owing partly to the imbalance between the arts and sciences, Black Mountain College was never accredited. Still many of its graduates enjoyed successful careers in the fine arts, education, and letters. Among the artists who were either students or faculty were: in architecture, Buckminster Fuller and Walter Gropius; in art, Josef Albers, Willem DeKooning, Robert Motherwell, and Robert Rauschenberg; in dance, Merce Cunningham and Paul Taylor; in music, John Cage; in film, Arthur Penn; and in literature, Eric Bentley, Robert Creeley, Paul Goodman, Alfred Kazin, Charles Olson, Joel Oppenheimer, and Jonathan Williams. In 1941 the school moved from the Blue Ridge Assembly grounds to a large Internationalist-style building designed by faculty member W. Lawrence Kocher. Following World War II, Black Mountain College fell into a period of decline; it ceased operation in 1956. The school received renewed attention with the publication of Martin Duberman’s study in 1972. (North Carolina Dept. of Cultural Resources)