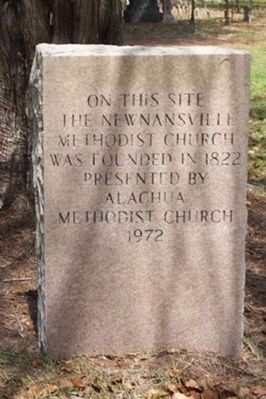 Location. 29° 48.307′ N, 82° 28.639′ W. Marker is in Alachua, Florida, in Alachua County. Marker can be reached from State Road 235, on the right when traveling west. Located between NW 121st Terrace and Hipp Way, at the Newnansville Cemetery. Touch for map. Marker is in this post office area: Alachua FL 32615, United States of America. Touch for directions. 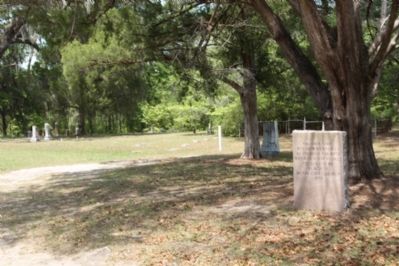 By Mike Stroud, March 30, 2012
2. Newnansville Methodist Church Site Marker
6.9 miles away); Bland Community and Ogden School / Odgen School (approx. 7.4 miles away). Touch for a list and map of all markers in Alachua.

Charles Inman, a preacher of great stature and personality, settled the issue at a Revival where a building committee of 3 men was selected and plans were begun for a new church building in Alachua. The building was completed in 1897 at a cost of $1800. While the new church was under construction a Sunday School was established with Mr. L. N. Pierce serving as Superintendent. 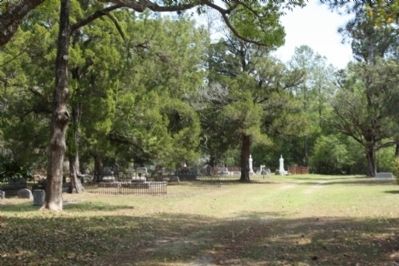 
Also see . . .  The history of the Alachua First United Methodist Church. From the diary of Isaac Boring in 1829:
“In a state of Revival, Methodism began to take on a new look and life, and the people were no longer satisfied with the old log church and they began to complain and call for a new and more modem church building. Fortunately, the local pioneer-preacher, Maxey Dell, owned a sawmill and he generously furnished the trees and sawed them into boards and framing that were used in the construction of the Newnansville Church.... The new church was divided in half by a railing that ran down through the center of the church, separating the men from the women.... An outside stairway led up to a balcony where there was seating for the Negro attendants .... (Submitted on June 9, 2012, by Mike Stroud of Bluffton, South Carolina.)
Credits. This page was last revised on June 16, 2016. It was originally submitted on June 9, 2012, by Mike Stroud of Bluffton, South Carolina. This page has been viewed 913 times since then and 19 times this year. Photos:   1, 2, 3. submitted on June 10, 2012, by Mike Stroud of Bluffton, South Carolina.
Share This Page.