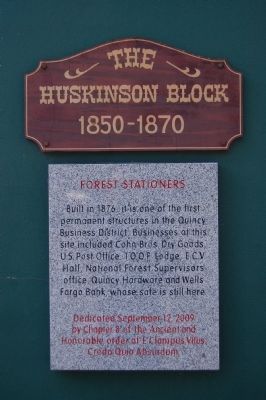 Photographed By Barry Swackhamer, May 29, 2012
1. Forest Stationers Marker
Inscription.
Forest Stationers. The Huskinson Block. Built in 1876, it is one of the first permanent structures in the Quincy Business District. Businesses of this site included Cohn Bros. Dry Goods, U.S. Post Office, I.O.O.F. Lodge, E.C.V. Hall, National Forest Supervisors office, Quincy Hardware and Wells Fargo Bank, whose safe is still here. . This historical marker was erected in 2009 by E Clampus Vitus, Chapter No. 8. It is in Quincy in Plumas County California

Topics and series. This historical marker is listed in these topic lists: Fraternal or Sororal Organizations • Industry & Commerce • Notable Buildings. In addition, it is included in the E Clampus Vitus series list. A significant historical year for this entry is 1876. 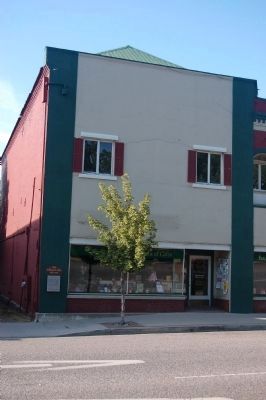 Photographed By Barry Swackhamer, May 29, 2012
2. Forest Stationers Marker
The marker is mounted at the far left of the building.

Click or scan to see
this page online
(within shouting distance of this marker); Bear Dance (about 300 feet away, measured in a direct line); Plumas Club (about 400 feet away); Goodwin Law Office (about 400 feet away); Beckwourth Trail – American Ranch (about 500 feet away); Coburn-Variel Home (about 600 feet away). Touch for a list and map of all markers in Quincy.
Credits. This page was last revised on June 16, 2016. It was originally submitted on June 14, 2012, by Barry Swackhamer of Brentwood, California. This page has been viewed 474 times since then and 10 times this year. Photos:   1, 2. submitted on June 14, 2012, by Barry Swackhamer of Brentwood, California. • Syd Whittle was the editor who published this page.
Share this page.