Lincoln to the Citizens of Indiana 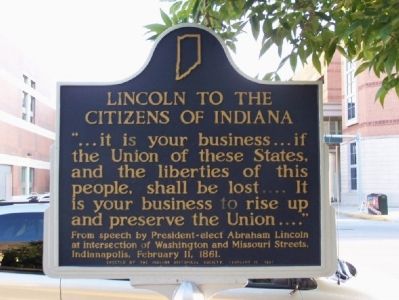 Photographed By Mbowyer, October 1, 2006
1. Lincoln to the Citizens of Indiana Marker
Inscription.
Lincoln to the Citizens of Indiana. . , “…it is your business…if the Union of these States, and the liberties of this people, shall be lost.... It is your business to rise up and preserve the Union....”, From speech by President-elect Abraham Lincoln at intersection of Washington and Missouri Streets, Indianapolis, February 11, 1861. . This historical marker was erected in 1961 by the Indiana Historical Society. It is in Indianapolis in Marion County Indiana

From speech by President-elect Abraham Lincoln at intersection of Washington and Missouri Streets, Indianapolis, February 11, 1861.

Topics and series. This historical marker is listed in this topic list: Government & Politics. In addition, it is included in the Former U.S. Presidents: #16 Abraham Lincoln, the Indiana Historical Bureau Markers, and the Lincoln 1861 Inaugural Train Stops series lists. A significant historical date for this entry is February 11, 1861. 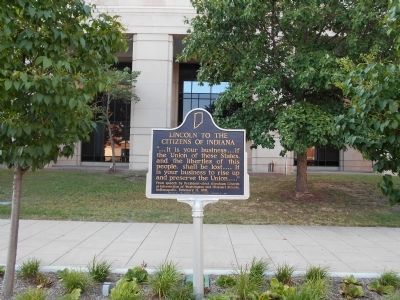 Photographed By Pat Filippone, July 18, 2013
2. Lincoln to the Citizens of Indiana Marker

Regarding Lincoln to the Citizens of Indiana. The complete quote: “If the union of these States and the liberties of this people shall be lost, it is but little to any one man of fifty-two years of age, but a great deal to the thirty millions of people who inhabit these United States, and to their posterity in all coming time. It is your business to rise up and preserve the Union and liberty for yourselves and not for me.”

Additional commentary.
1. It is Here that Lincoln Arrived in Indianapolis ! 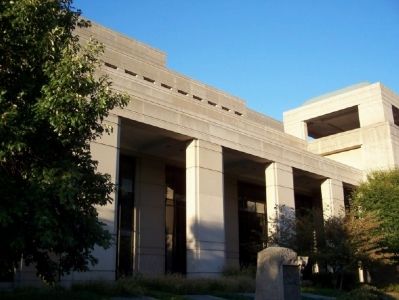 Photographed By Mbowyer, October 1, 2006
3. Marker is in front of the Indiana Government Center Building
Just short of the “old” Union Station Lincoln’s train stopped on West Washington and South Missouri Street in Indianapolis. It was the first major test of security for Lincoln. Colonel Elmer Ellsworth was in charge of “elaborate precautions.” The Indianapolis population then was 18,600 but Lincoln’s arrival brought a crowd of 20,000 to the City.

Prior to the trip a Circular of Instructions was sent to all the reception committees at the various locations where stops were scheduled. “The President Elect will under no circumstances attempt to pass through any crowd until such arrangements are made and approved by Col. Ellsworth.”

Thusly, Lincoln’s train was to stop outside Union Station for better crowd control and security. Horse-drawn carriages took Lincoln and his entourage to the Bates House to spend the night.

Colonel Ellsworth breathed a sigh of relief when Lincoln was safely boarded the train again (in Union Station) the next morning where Mary Lincoln and the children, Willie and Tad, first joined up with Abraham—after an all night ride on a sleeper train car to catch up with Abraham in Indianapolis as a birthday surprise. 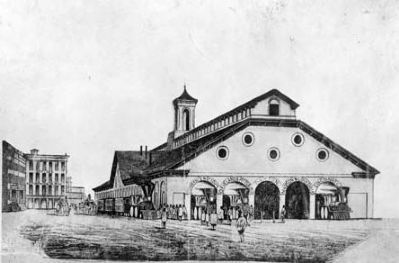 Courtesy Bass Photo Collection, Indiana Historical Society
4. "Old" Union Station - Indianapolis, Indiana
This is he first Union Station in the United States. It opened September 28, 1853 serving seven railroads. By 1870 over 100 trains a day passed through. In 1890 this structure was replaced with the current Romanesque Design Indianapolis Union Station.
— Submitted December 7, 2007, by Al Wolf of Veedersburg, Indiana. 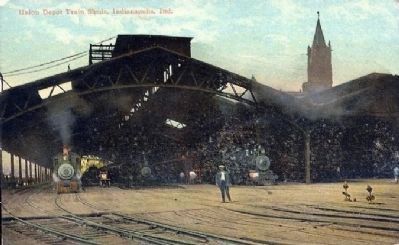 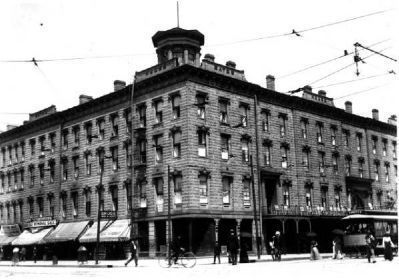