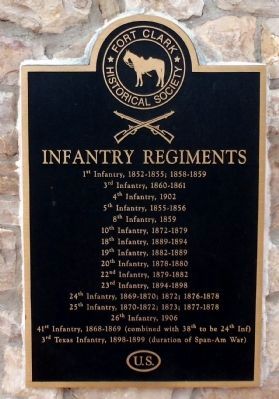 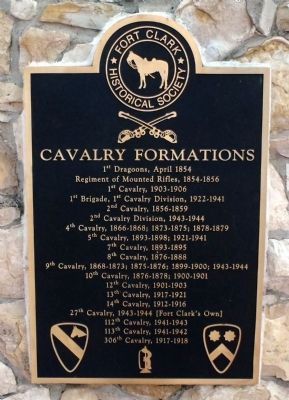 Other Units and Service 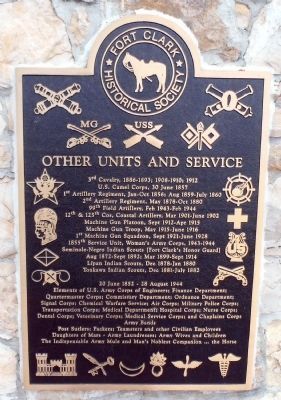 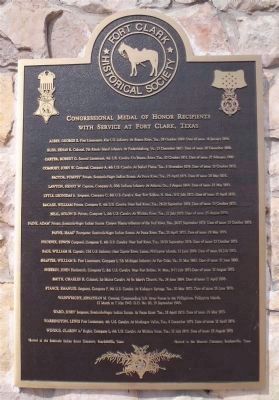 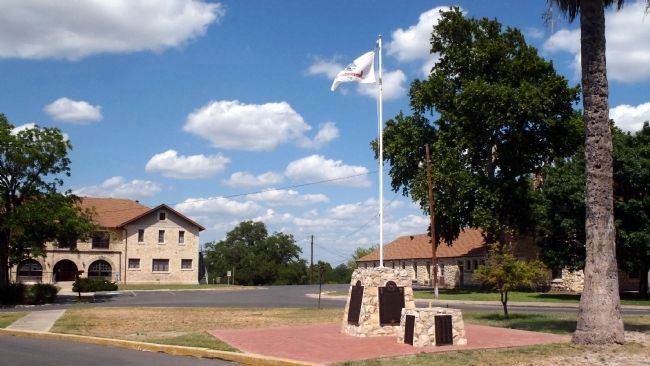 Topics. This historical marker and memorial is listed in this topic list: Military. A significant historical date for this entry is January 18, 1894.

Location. 29° 18.418′ N, 100° 25.229′ W. Marker is near Brackettville, Texas, in Kinney County. Marker is at the intersection of McClernand Road and Colony Row, in the median on McClernand Road. Monument is located on the grounds of the Fort Clark Springs Association in the Fort Clark National Register Historic Distric and is accessible to the public. Touch for map. Marker is in this post office area: Brackettville TX 78832, United States of America. Touch for directions.

Other nearby markers. At least 8 other markers are within walking distance of this marker. Seminole-Negro Indian Scout Detachment (here, next to this marker); 2nd Cavalry Division at Fort Clark 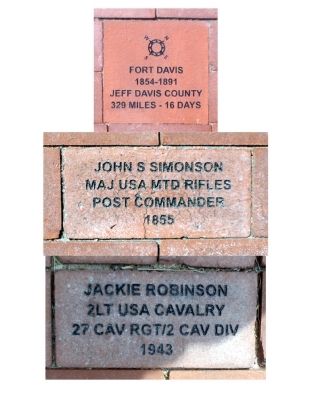 More about this memorial. Monument is a large four-sided stone cairn with a large bronze plaque mounted on the face of each side. The monument also holds a flagpole where the U.S. Army flag flies 24-hours a day. In addition to text, each marker includes relief renderings of U.S. Army unit and branch insignia and medals.

Surrounding the base of the Memorial is a plaza of memorial bricks. The outside edge of the plaza includes unique bricks engraved with the names of other Texas frontier forts. Each brick features a compass pointing in the direction of the named fort and notes the years the post was active, the mileage from Fort Clark, and the number of days it took to travel on horseback to each fort. The next row of bricks inside the edge includes a brick for each officer who served as post commander, his unit and dates of command. The remaining bricks are memorials to individuals, purchased in support of an on-going funding raising campaign to erect a bronze statue of a Seminole Scout atop the small cairn.

Regarding U.S. Army Unit Memorial. Fort Clark’s prominent role in the shaping of Texas history and noteworthy service to the nation was accomplished entirely through the faithful duty performance of the U.S. Army’s most distinguished units. All of the Army’s Black regiments served at Fort Clark, in addition to the 2nd Cavalry Division, and Fort Clark’s Honor Guard, the Seminole-Negro Indian Scouts. No other post can make this claim. Fort Clark’s lineage of U.S. Army units includes the finest of the Army’s historic Cavalry and Infantry Regiments. Additionally, twenty-four recipients of the Congressional Medal of Honor served at Fort Clark. The Fort Clark Historical Society holds their achievements in the highest regard and is committed to providing a lasting tribute through this memorial to the units and individuals on the site of their service.
Credits. This page was last revised on August 27, 2020. It was originally submitted on June 18, 2012, by William F Haenn of Fort Clark (Brackettville), Texas. This page has been viewed 1,162 times since then and 36 times this year. Photos:   1, 2, 3, 4, 5, 6. submitted on June 18, 2012, by William F Haenn of Fort Clark (Brackettville), Texas. • Bernard Fisher was the editor who published this page.
Share this page.