Topics and series. This historical marker is listed in this topic list: Communications. In addition, it is included in the E Clampus Vitus series list. A significant historical date for this entry is September 15, 1850.

Location. 39° 56.218′ N, 120° 56.953′ W. Marker is in Quincy, California, in Plumas County. Marker can be reached from the intersection of Crescent Street (State Highway 70 / 89) and Main Street, on the right when traveling south. These markers may be hard to see if there are cars parked in front of the building. Touch for map. Marker is at or near this postal address: 1 Crescent Street, Quincy CA 95971, United States of America. Touch for directions. 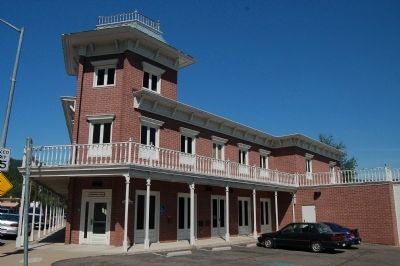 Photographed By Barry Swackhamer, May 31, 2012
2. Feather Publishing Co. Marker
The markers are on the lower building wall to the left of the automobile.

More about this marker. The Bulletin was established Aug. 11, 1866, as the Plumas National (later changed to Plumas National Bulletin, May 16, 1892) subsequently changed to its present name May 7, 1931, when it was merged with the Plumas Independent (1892-1945) on June 7, 1945. Published weekly. It is part of the Feather Publishing family of newspapers serving Plumas and Lassen counties.
Credits. This page was last revised on June 16, 2016. It was originally submitted on June 19, 2012, by Barry Swackhamer of Brentwood, California. This page has been viewed 500 times since then and 19 times this year. Photos:   1, 2. submitted on June 19, 2012, by Barry Swackhamer of Brentwood, California. • Syd Whittle was the editor who published this page.
Share this page.