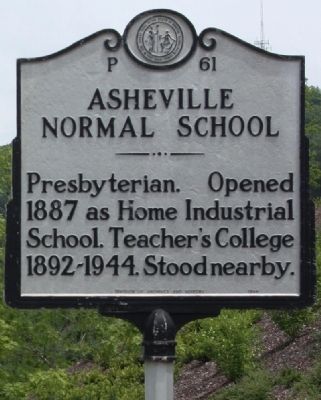 Erected 1984 by Division of Archives and History. (Marker Number P-61.)

Topics and series. This historical marker is listed in this topic list: Education. In addition, it is included in the North Carolina Division of Archives and History series list. A significant historical year for this entry is 1887.

Location. 35° 34.669′ N, 82° 33.061′ W. Marker is in Asheville, North Carolina, in Buncombe County. Marker is on Victoria Road near Livingston Street, on the right when traveling north. Located near the Medical complex. Touch for map. Marker is in this post office area: Asheville NC 28801, United States of America. Touch for directions. 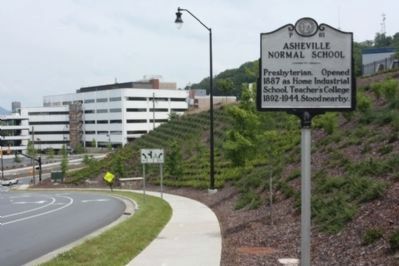 Click or scan to see
this page online
away); The County of Buncombe (approx. 0.9 miles away); Daniel K. Moore (approx. one mile away). Touch for a list and map of all markers in Asheville.

Regarding Asheville Normal School. Under the guidance of Dr. Thomas Lawrence, with the generous donation of land by the Pease family, and with the support of the Presbyterian Board of Home Missions, the Normal and Collegiate Institute was born in 1892. The Normal, as it was later called by locals, had its foundations in the Home Industrial School which opened in 1887, in the Pease home located between Asheville and Biltmore Forest. Pease and Lawrence sought to provide education for young girls and train them to become educators. The first year saw 110 pupils ranging in age from five to twenty.

The school prospered and a normal school was added in 1892 with the purpose of training teachers to work in the rural highlands. It went through several name changes and eventually became a conglomerate of several sister schools, called the Asheville Normal and Associated Schools, including the Normal, Farm School, Home School, and Pease House. Warren Wilson College in Swannanoa is a descendant institution. The school sought to train the whole student, providing 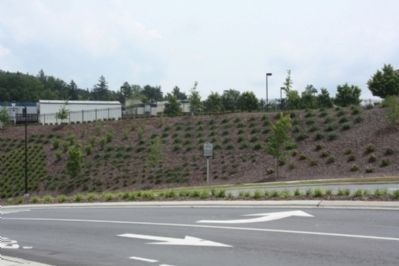 Photographed By Mike Stroud, May 19, 2012
3. Asheville Normal School Marker
practical knowledge in furniture and house construction as well as music and teaching methods. Faculty members were brought to the associated schools from throughout the country who taught topics such as weaving, mathematics, literature and cooking.

By 1918 the school had graduated 570 women. The motto of “Service” was the guiding force for many of the school’s graduates. Service for the school meant work with the people of western North Carolina and the Appalachian region to “stimulate them to higher ideals” through faith. The Normal and Collegiate Institute was one of many women’s schools that flourished in western North Carolina in the late nineteenth-century and the early twentieth-century. Not all had the service mission of the Institute since most were typical “finishing” schools.

The Board of Home Missions changed the school’s name to the Asheville Normal and Teachers College in 1931 and the school then offered a Bachelor of Science in Education. The newly organized college was approved by the American Association of Teachers’ Colleges in 1933. Financial support from the Board of National Missions ended in 1940 and, to fill the void, local citizens banded together to support the school, changing its name to Asheville College. Attempts to keep the school open failed and it closed its doors in 1944. The property and buildings were sold for a hospital and were later torn down to make way for Memorial Mission Hospital.(North Carolina Office of Archives & History — Department of Cultural Resources)
Credits. This page was last revised on June 22, 2021. It was originally submitted on June 21, 2012, by Mike Stroud of Bluffton, South Carolina. This page has been viewed 1,123 times since then and 108 times this year. Photos:   1, 2, 3. submitted on June 21, 2012, by Mike Stroud of Bluffton, South Carolina.
Share this page.