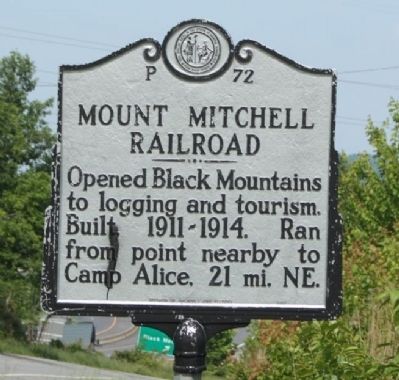 Erected 1989 by Division of Archives and History. (Marker Number P-72.)

Topics and series. This historical marker is listed in this topic list: Railroads & Streetcars. In addition, it is included in the North Carolina Division of Archives and History series list. 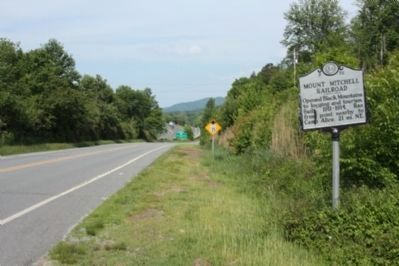 Regarding Mount Mitchell Railroad. The story of the Mount Mitchell Railroad, like that of much of western North Carolina in the twentieth century, is one mixing equal parts of commerce and tourism. When the Black Mountains were opened to logging operations in the early 1900s, the first order of business was the construction of a railway to haul out the timber (most of it spruce pine). Work began in 1911, with the route surveyed by C. A. Dodd and work supervised by George Meyers and E. L. Sutton. The line ran across the Presbyterian grounds at Montreat and joined with Southern Railway just east of the town of Black Mountain. The other terminus, twenty-one miles northeast and 3,500 feet higher in elevation, was Camp Alice, located just one-half mile from the summit of Mount Mitchell. Work on the railroad was completed in 1914.

Many western North Carolinians opposed the deforestation of the Black Mountains, among them Governor Locke Craig, who led the move to establish Mount Mitchell State Park in 1915. This ushered in a 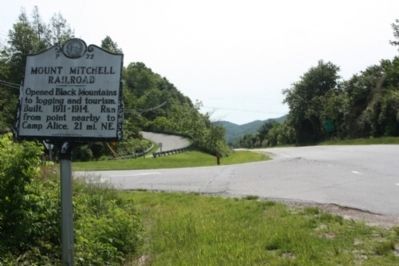 Photographed By Mike Stroud, May 19, 2012
3. Mount Mitchell Railroad Marker at the Old Toll Road intersection
new age of tourism with the rail line being opened to passenger traffic as early as July 1915. In 1923 the new owners of the railroad bed converted it into the “Mount Mitchell Motor Road,” a cinder-surfaced, one-way toll road to the top of the highest peak in the eastern United States. The route was so popular that a second toll road was built by competing entrepreneurs on the Yancey County side of the Black Mountain range.

In 1939 that portion of the Blue Ridge Parkway between NC 80 and Black Mountain Gap was completed, thereby giving tourists toll-free access to Mount Mitchell. A section of the old railroad bed route was taken over by the state; the remainder has deteriorated.(North Carolina Dept. of Cultural Resources)