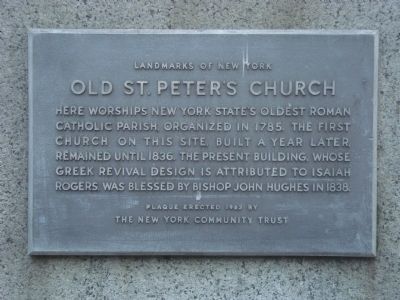 Here worships New York State’s oldest Roman Catholic parish organized in 1785. The first church on this site built a year later, remained until 1836. The present building, whose Greek Revival design is attributed to Isaiah Rogers, was blessed by Bishop John Hughes in 1838.

Topics. This historical marker is listed in this topic list: Churches & Religion. A significant historical year for this entry is 1785. 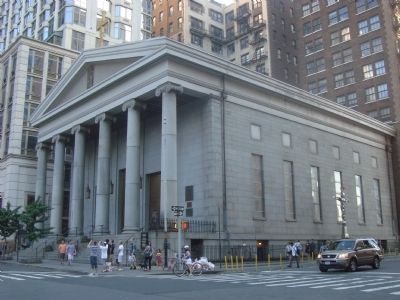 Also see . . .
1. Church of St. Peter. Old St. Peter's is the Mother Church of Catholic New York, as it is the oldest Roman Catholic parish in New York City and New York State. The Roman Catholic Church was not permitted to function in New York during the Dutch and British colonial periods, except for the administration of Gov. Thomas Dongan (1683-88), who was himself Catholic. (Submitted on July 7, 2012, by Barry Swackhamer of Brentwood, California.)