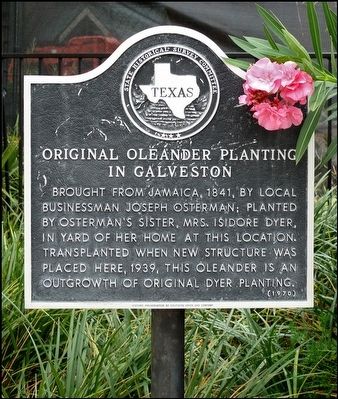 Brought from Jamaica, 1841, by local businessman Joseph Osterman; planted by Osterman's sister, Mrs. Isidore Dyer, in yard of her home at this location. Transplanted when new structure was placed here, 1939, this oleander is an outgrowth of original Dyer planting.

Topics. This historical marker is listed in this topic list: Horticulture & Forestry. A significant historical year for this entry is 1841. 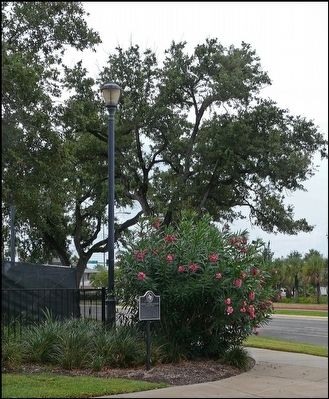 Photographed By Jim Evans, July 8, 2012
2. Original Oleander Planting in Galveston Marker
The flowering bush on the corner is an oleander. Galveston is famous for oleanders and has many throughout the island.

Also see . . .
1. History of the Oleander in the United States. Surprise. They began in Galveston (Submitted on July 9, 2012, by Jim Evans of Houston, Texas.)