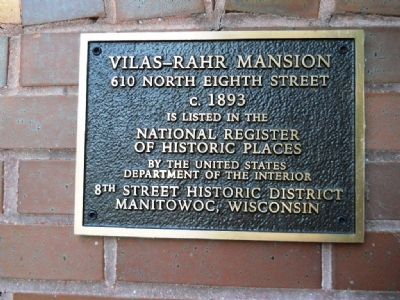 Vilas-Rahr Mansion
610 North Eighth Street
c. 1893
is listed in the
National Register
of Historic Places
by the United States
Department of the Interior

Topics. This historical marker is listed in this topic list: Arts, Letters, Music. A significant historical year for this entry is 1893.

Other nearby markers. At least 8 other markers are within walking distance of this marker. Sputnik IV (within shouting distance of this marker); Union Park (about 800 feet away, measured in a direct line); G.W. Fechter Stationery (approx. 0.4 miles away); Manitowoc Motor Hotel (approx. 0.4 miles away); O. Torrison & Co. (approx. half a mile away); Manitowoc Submarines 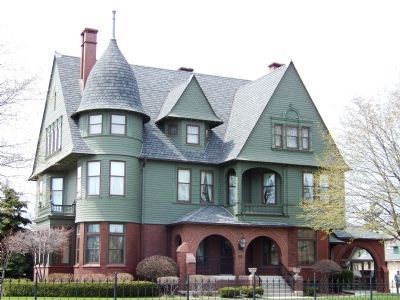 Photographed By Kent Salomon, May 4, 2008
2. Vilas - Rahr Mansion
The marker is mounted between the two front arches.

Regarding Vilas - Rahr Mansion. Joseph Vilas Family (1893-1905)
This Queen Anne style Victorian mansion was built by Joseph and Mary Vilas between 1891 and 1893 at a cost of between $35,000 to $50,000. It was designed by the Milwaukee architects George Ferry and Alfred Clas, who also designed the Pabst Mansion in Milwaukee.

The house is an eclectic assemblage of turrets, dormers, bay windows, and building materials combined to make an attractive façade and a formal yet comfortable interior.The house contains 13 bedrooms, seven full and partial baths, hot-water heat with six fireplaces, gaslight, and cistern water.

Joseph Vilas, mayor of Manitowoc from 1893-1895, was a railroad and mining entrepreneur. Mary Vilas died of heart disease in 1901. Joseph Vilas lived in the house until 1905 - when suffering from a painful, incurable illness - he ended his life with a revolver.

Reinhardt Rahr Family (1910-1941)
The house remained empty until 1910 when Reinhardt Rahr, president of Rahr Malting Company, purchased it. The Rahr family added handsome wallcoverings, electric light, and city water to the house. Reinhardt Rahr died in 1921. His widow, Clara, donated the house to the city in 1941 to be used for educational and civic purposes as a museum and civic center.

Rahr Civic Center (1941-1975)
The Rahr Civic Center, with the aid of a grant from the Rahr family, was able to hire a professional director in 1950. The City of Manitowoc appointed a Board of Directors and proceeded to repair and remodel the house for a modest program of changing exhibitions and displays.

Rahr-West Art Museum (1975-Present)
By the 1970s, the Rahr Civic Center had outgrown its quarters and faced abandonment. John and Ruth West became interested and offered their assistance.

With gifts from both the Rahr and West Foundations, land was purchased and an exhibition wing was opened in November of 1975. The mansion was added to the National Register of Historic Places in 1977. The brick front porch and entrance area was restored in 1979-80. They had been metal and glass from the 1953 remodeling. In 1986, John and Ruth West added an additional gallery space for a rotating display of the permanent collection.

In order to provide better class space in the lower level, the City of Manitowoc and the West Foundation collaborated in a 2007 renovation, which has provided an updated area for the museum's expanded education program.