Photographed By M. Blakelylaw, June 3, 2012
1. Flagpole Dedication Marker
The marker is almost flush with the ground immediately in front of Memorial Park's flagpole.
Inscription.
Lest We Forget. .
These veterans died so that we Americans could worship God in our own way and preserve our great heritage "Freedom" V.F.W. Post 1192 John "Steve" Brodie. . This historical marker was erected by VFW Post 1192. It is in Duncan in Stephens County Oklahoma

These veterans died so that we Americans
could worship God in our own way
and preserve our great heritage "Freedom"
V.F.W. Post 1192 John "Steve" Brodie

Location. 34° 30.686′ N, 97° 58.037′ W. Marker is in Duncan, Oklahoma, in Stephens County. Marker can be reached from U.S. 81 north of West Pine Avenue, on the right when traveling south. The marker lies almost flush with the ground right in front of the flagpole in Memorial Park. Touch for map. Marker is in this post office area: Duncan OK 73533, United States of America. Touch for directions.

Photographed By M. Blakelylaw, June 3, 2012
2. Memorial Park Flagpole
The monument is the small grey object on the ground right in front of the flagpole.

Click or scan to see
this page online
(about 600 feet away); Indian Base Line (approx. 0.2 miles away); Halliburton (approx. 0.4 miles away). Touch for a list and map of all markers in Duncan.

More about this marker. Team Blakely could not determine the identity of the individual named on the marker. A number of John and/or Steve Brodies appear in an internet search, but none are particularly related to Duncan, the VFW, veterans, or the military. It would be interesting to see if anyone else around here knows. 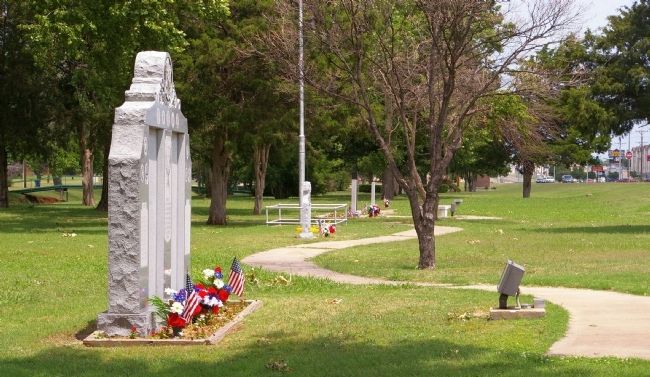 Photographed By M. Blakelylaw, June 3, 2012
3. Memorial Park Veterans' Section
This photo looks north from about the middle of the park. Most of the veterans' memorials are contained in this portion of Memorial Park. The park itself is about 7-8 blocks long along US 81 in the middle of Duncan. It contains all types of memorials and monuments, not just to veterans, but also to historic events and people.
Credits. This page was last revised on June 16, 2016. It was originally submitted on July 21, 2012, by M. Blakelylaw of Southeast, Oklahoma. This page has been viewed 428 times since then and 11 times this year. Photos:   1, 2, 3. submitted on July 21, 2012, by M. Blakelylaw of Southeast, Oklahoma. • Bernard Fisher was the editor who published this page.
Share this page.