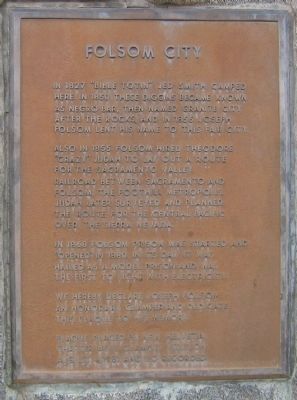 Photographed By Syd Whittle, January 8, 2006
1. Folsom City Marker
Inscription.
Folsom City. . In 1827 “Bible Totin” Jed Smith camped here in. In 1850 these diggings became known as Negro Bar, then named Granite City after the rocks, and in 1855 Joseph Folsom lent his name to this fair city., Also in 1855 Folsom hired Theodore “Crazy” Judah to lay out a route for the Sacramento Valley Railroad between Sacramento and Folsom, the foothill metropolis. Judah later surveyed and planned the route for the Central Pacific over the Sierra Nevada., In 1868 Folsom Prison was started and “opened” in 1880. In the day it was hailed as a model prison and was first to light with electricity., We here declare Joseph Folsom an honorable Clamper and dedicate this plaque to his memory . This historical marker was erected in 1987 by New Helvetia Chapter #5 E. Clampus Vitus, on August 8, 1987. It is in Folsom in Sacramento County California

In 1827 “Bible Totin” Jed Smith camped here in. In 1850 these diggings became known as Negro Bar, then named Granite City after the rocks, and in 1855 Joseph Folsom lent his name to this fair city.

Also in 1855 Folsom hired Theodore “Crazy” Judah to lay out a route for the Sacramento Valley Railroad between Sacramento and Folsom, the foothill metropolis. Judah later surveyed and planned the route for the Central Pacific over the Sierra Nevada.

In 1868 Folsom Prison was started and “opened” in 1880. In the day it was hailed as a model prison and was first to light with electricity.

Topics and series. This historical marker is listed in these topic lists: Industry & Commerce • Notable Places • Railroads & Streetcars • Settlements & Settlers. In addition, it is included in the E Clampus Vitus series list. A significant historical year for this entry is 1827. 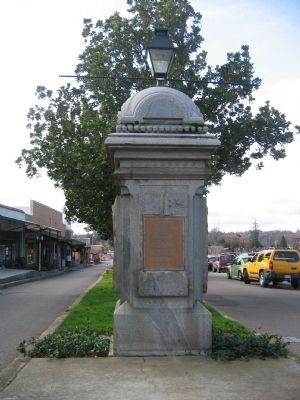 Click or scan to see
this page online
Marker is missing. It was located near 38° 40.615′ N, 121° 10.674′ W. Marker was in Folsom, California, in Sacramento County. Marker was at the intersection of Sutter Street and Wool Street, in the median on Sutter Street. Touch for map. Marker was in this post office area: Folsom CA 95630, United States of America. Touch for directions.

More about this marker. The City of Folsom is currently re-doing Historic Sutter Street and the marker has been removed during construction. A local merchant stated that the marker is being stored for safe keeping and will be returned upon completion.

Regarding Folsom City. Folsom Prison – Folsom Prison is one of the city’s better known attractions. The Folsom Prison Museum is located near the entrance of Folsom Prison. Run by volunteers, the museum contains documents and artifacts from throughout Folsom's long and colorful history.
Folsom State Prison's location was selected due to an unlimited amount of native stone for building the prison. Also, the American River offered ample water and formed a natural 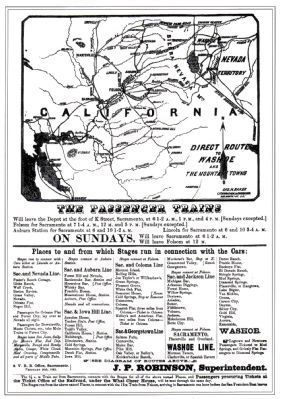 Huntington Library Collection
3. Advertising Map of the Sacramento Valley Railroad Route, 1863
boundary for the prison. As one of the nation's first maximum prisons, Folsom received it's first 44 inmates on July 26, 1880. They were transferred by boat and train from San Quentin.

Historic Sutter Street – Folsom’s historic heart is Sutter Street – the city’s original business district. It is the home of the Folsom History Museum. Gold rush stage coaches dropped off miners looking to become rich in the foothills river beds. The Pony Express stopped in Folsom to drop off mail. The Sacramento Valley Railroad – the first in California – linked Sacramento to Folsom which soon became a busy economic center for the foothills

Folsom History Museum – Set in an original 1860 Wells Fargo & Co. Assay Office, the museum offers a glimpse into the city’s rich history from the Maidu Indian days to the present. Gold Rush and Pony Express-era histories are highlighted.

Historic Folsom Powerhouse – Finished in 1895, the powerhouse was the first electrical generating station transmitting high-voltage, AC current to Sacramento and remains much as it existed when it was replaced by the Folsom Dam in 1952.

See Also: "Other Nearby markers" for additional information. 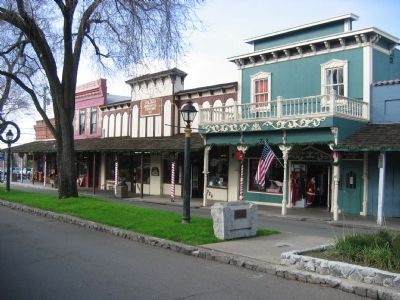 Photographed By Syd Whittle, January 8, 2006
4. Historic Sutter Street
1. From the Diary of Mary Ballou, Negro Bar, 1852
"I would not advise any Lady to come out here and suffer the toil and fatique that I have suffered for the sake of a little gold neither do I advise any one to come. Clark Simmon's wife says if she was safe in the States she would not care if she had one cent. She came here last night and said, "Oh dear I am so homesick that I must die."
— Submitted December 19, 2008.
2. Folsom (1817-1855)
Joseph Libby Folsom was born in New Hampshire in 1817 and he was an 1840 graduate of West Point. Captain Folsom, U.S. Army quartermaster department, arrived in California in 1847 with the Stevenson Regiment. After the Mexican War, he remained in San Francisco. By 1848, Folsom was collector of the Port. The following year he became interested in capitalizing on the future potential of California. He purchased several lots in San Francisco and became interested in the estate of William A. Leidesdorff.

In June of 1849, Folsom left San Francisco for the Danish West Indies to locate Leidesdorff's heirs. There he found Anna Maria Spark, who had never married Leidesdorff's father, but had been granted an act legitimizing her children. Folsom contracted with her to purchase title to Leidesdorff's San Francisco 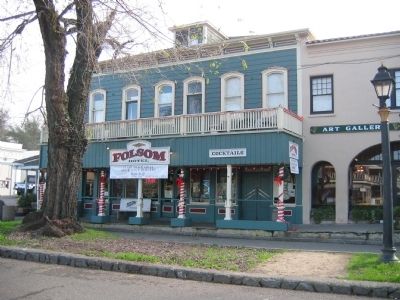 Photographed By Syd Whittle, January 8, 2006
5. Folsom Hotel on Historic Sutter Street
holdings and Rancho Rio de los Americanos for $75,000 dollars to be paid in three installments. Anna Spark, knowing nothing of land values in California, was only too happy to accept Folsom's offer.

When Folsom returned to San Francisco, he found land values to be skyrocketing, and his newly purchased title to the Leidesdorff estate already in question. The government was claiming right to the property purchased by Folsom. The claim was brought because under old Mexican law foreigners could not inherit property. The dispute was brought to the courts, where legal entanglements over the conflicts of Mexican, American and Danish laws kept it for over ten years.

Meanwhile, as the value of his holdings increased, Folsom was faced with the near-impossible battle to finance his legal defense to their title. He was forced to borrow repeatedly, sometimes paying interest as high as 3% per month for short-term notes. His troubles were further complicated by Anna Spark's refusal to accept the second installment payment on her son's estate.

By 1855, Folsom's health as well as his cash had begun to give out. He hired Theodore Judah to survey and lay out a town site near the mining camp of Negro Bar to be called Granite City. There had been talk since 1852 of a railroad, the first in the West, to be built from Sacramento at least as far as Negro Bar. In February 1855, 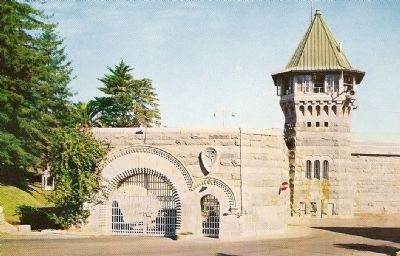 Mike Roberts, Berkeley, Ca. Published by Pioneer News Co. Roseville,Ca
6. Vintage Postcard - California State Prison at Folsom
Main entrance to Folsom Prison. Surrounded by a huge stone wall of granite, which took 18 years in the making, the prison was established in 1880 on the banks of the American River near Folsom, California
Folsom accepted the post of president of the fledgling railroad.

Joseph Libby Folsom died at the age of 38 on July 19, 1855, of renal failure or pneumonia at Mission San Jose. (Different sources give different causes of his death). Like Leidesdorff, he died too soon to see the development of Rancho Rio de Los Americans, part of which was to become the town of Folsom. Only three weeks after Folsom's death, the first rail was laid on the new Sacramento Valley Railroad; and the first train completed the trip to Folsom in February 1856. In the same month, town lots in Granite City, which was renamed Folsom in his honor, were placed on the auction block, with most of the 2,048 lots sold the first day.
Source: Folsom History Museum (http://www.folsomhistorymuseum.org/history.htm)
— Submitted February 2, 2009, by Syd Whittle of Mesa, Arizona. 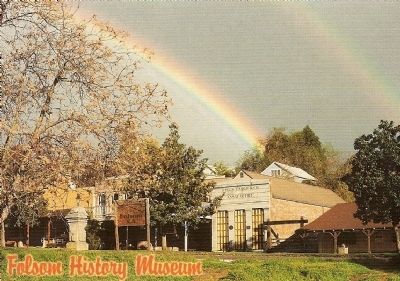 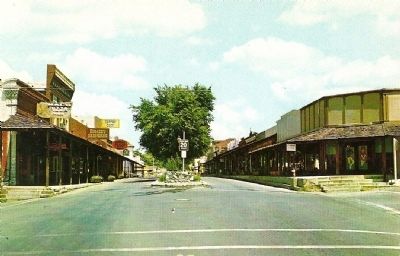 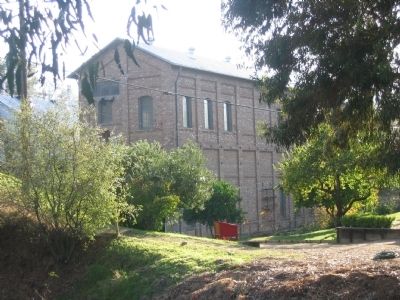 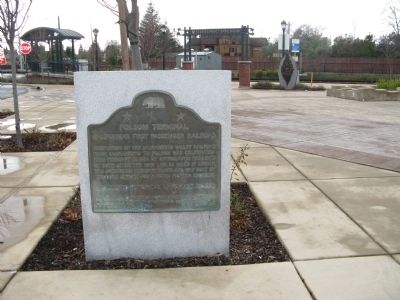 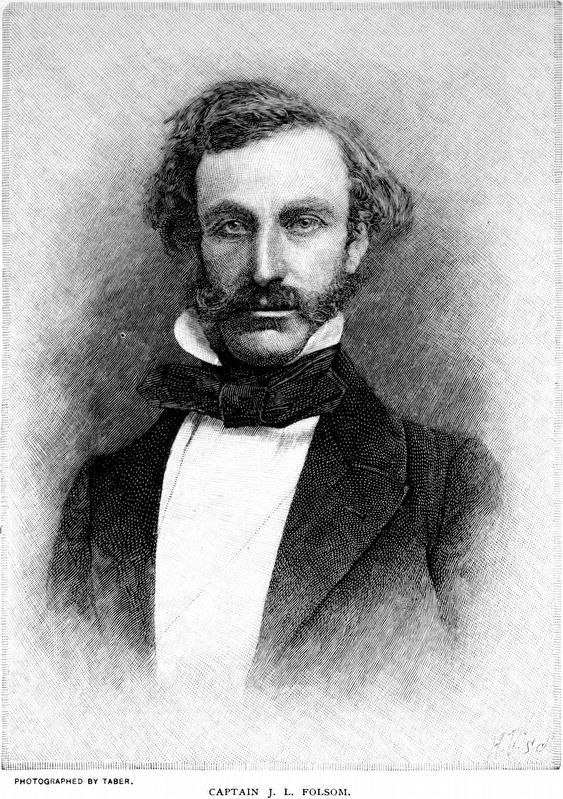