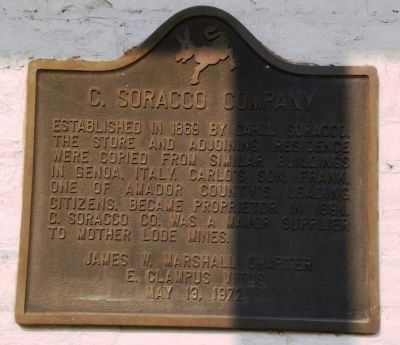 Established in 1869 by Carlo Soracco, the store and adjoining residence were copied from similar buildings in Genoa, Italy. Carlo’s son, Frank, one of Amador County’s leading citizens, became proprietor in 1894. C. Soracco Co. was a major supplier to Mother Lode mines.

Topics and series. This historical marker is listed in this topic list: Notable Buildings. In addition, it is included in the E Clampus Vitus series list. A significant historical year for this entry is 1869.

Location. 38° 23.669′ N, 120° 48.192′ W. Marker is in Sutter Creek, California, in Amador County. Marker is on Main Street (Old Highway 49), on the right when traveling north. The location is between Randolph Street and Gopher Flat Road. Touch for map. Marker is at or near this postal address: 78 Main Street, Sutter Creek CA 95685, United States of America. Touch for directions. 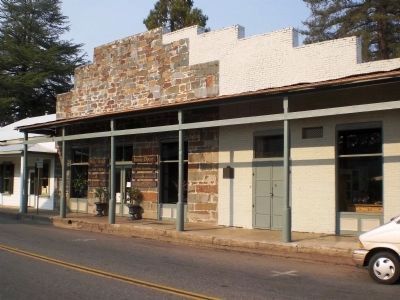 More about this marker. Marker is to the left of the gray door.