On This Site Stood Metro Clothes 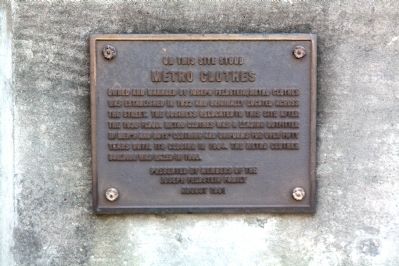 Owned and managed by Joseph Feldstein, Metro Clothes was established in 1932 and originally located across the street. The business relocated to this site after the 1936 flood. Metro Clothes was a leading outfitter in men’s and boys’ clothing and uniforms for over fifty years until its closing in 1984. The Metro Clothes building was razed in 1990.

Erected 1991 by members of the Joseph Feldstein family, in August.

Location. 39° 39.063′ N, 78° 45.793′ W. Marker is in Cumberland, Maryland, in Allegany County. Marker is at the intersection of South Mechanic Street and Baltimore Street, on the left when traveling north on South Mechanic Street. It is in the parklet (very small park) on the southwest corner of the intersection. Touch for map. Marker is at or near this postal address: 19 Baltimore St, Cumberland MD 21502, United States of America. Touch for directions. 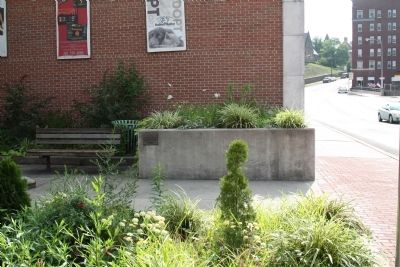 Editor’s want-list for this marker. Old Photo of the Metro Clothes building. • Can you help?
Share This Page.