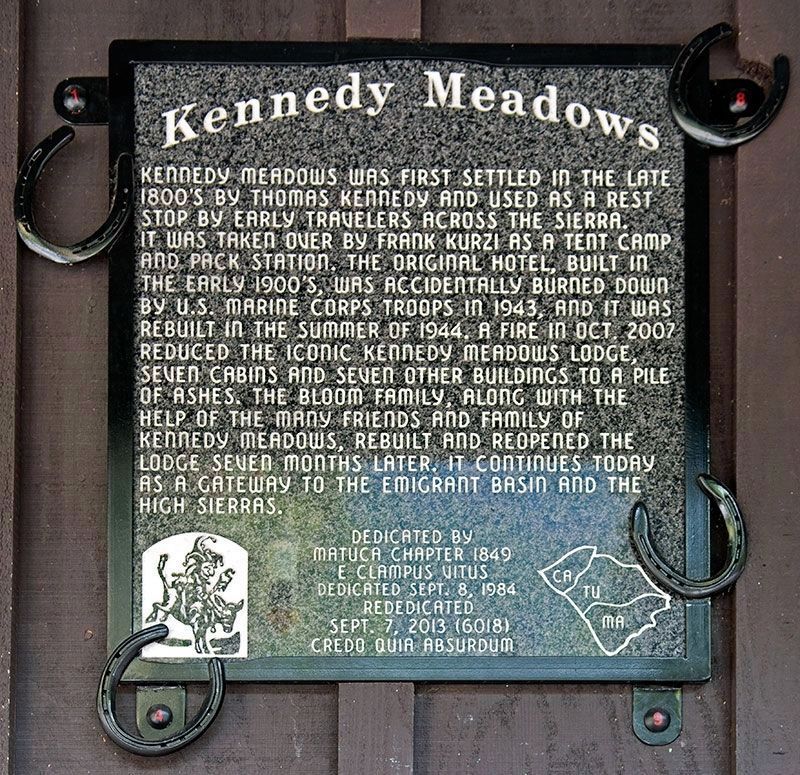 First settled in late 1800s by Thomas Kennedy and used as a rest stop by early travelers across the Sierras, Kennedy Meadows was taken over by Frank Kurzi as tent camp and pack station. Original hotel was built in early 1920s, was burned accidentally by U.S. Marine Corp troops in 1943. Present building rebuilt in summer 1944. Still standing and used as a gateway to the Emigrant Basin and High Sierras.

Kennedy Meadows was first settled in late 1800's by Thomas Kennedy and used as a rest stop by early travelers across the Sierra. It was taken over by Frank Kurzi as a tent camp and pack station. The original hotel, built in the early 1900's, was accidentally burned down by U.S. Marine Corps troops in 1943, and it was rebuilt in the summer of 1944. A fire in Oct. 2007 reduced the iconic Kennedy Meadows Lodge, seven cabins and seven other buildings to a pile of ashes. The Bloom family, along with the help of the many friends and family of Kennedy Meadows, rebuilt and reopened the lodge seven 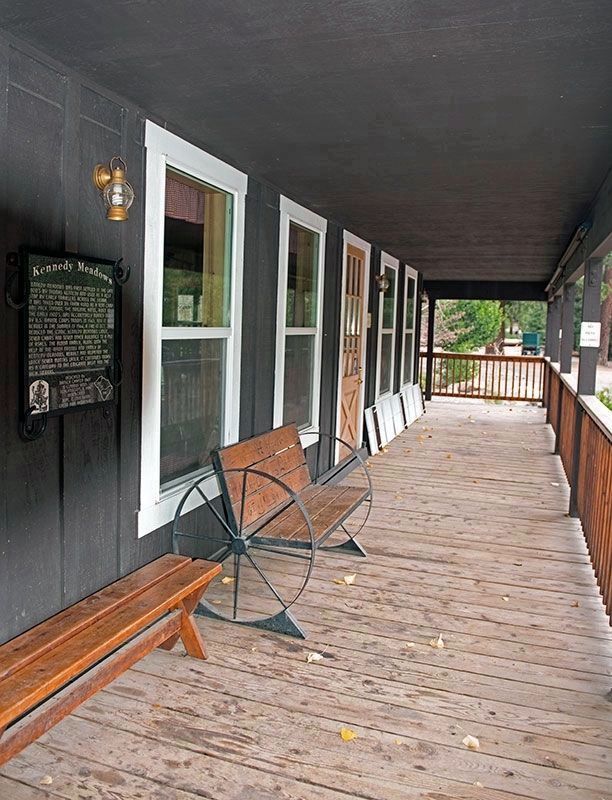 By Alvis Hendley, October 24, 2016
2. Kennedy Meadows Marker
The marker is on the front porch of the new Kennedy Meadows Lodge.
months later. It continues today as a gateway to the Emigrant Basin and the High Sierras.

Topics and series. This historical marker is listed in this topic list: Notable Places. In addition, it is included in the E Clampus Vitus series list.

Location. This marker has been replaced by another marker nearby. It was located near 38° 18.675′ N, 119° 44.764′ W. Marker was near Kennedy Meadows, California, in Tuolumne County. Marker could be reached from Kennedy Meadows Road south of Sonora Pass Highway (California Highway 108). Touch for map. Marker was in this post office area: Pinecrest CA 95364, United States of America. Touch for directions.

More about this marker. This marker was destroyed in the October 1, 2007 fire that burned down the Kennedy Meadows Resort Hotel. 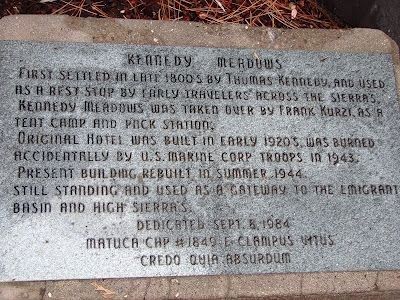 By Angela Maria, circa Sept. 2007
3. Original Kennedy Meadows Marker
. According to Cal Fire officials an early morning fire destroyed the Kennedy Meadows lodge and Seven cabins on Monday.
The article also has photos of the Lodge before the fire, and the views of the distruction afterwards. (Submitted on August 27, 2012, by Barry Swackhamer of Brentwood, California.) 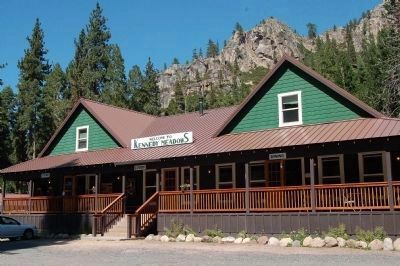