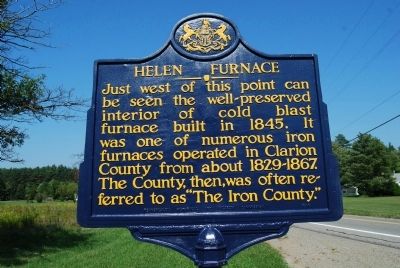 Photographed By Mike Wintermantel, August 31, 2012
1. Helen Furnace Marker
Inscription.
Helen Furnace. . Just west of this point can be seen the well-preserved interior of cold blast furnace built in 1845. It was one of numerous iron furnaces operated in Clarion County from about 1829-1867. The County, then, was often referred to as "The Iron County." . This historical marker was erected in 1949 by Pennsylvania Historical and Museum Commission. It is Near Clarion in Clarion County Pennsylvania

Just west of this point can be seen the well-preserved interior of cold blast furnace built in 1845. It was one of numerous iron furnaces operated in Clarion County from about 1829-1867. The County, then, was often referred to as "The Iron County."

Topics and series. This historical marker is listed in this topic list: Industry & Commerce. In addition, it is included in the Appalachian Iron Furnaces, and the Pennsylvania Historical and Museum Commission series lists. A significant historical year for this entry is 1845.

Other nearby markers. At least 6 other markers are within 17 miles of this marker, measured as the crow flies. Clarion County (approx. 6.1 miles away); Clarion County Civil War Soldier's Monument 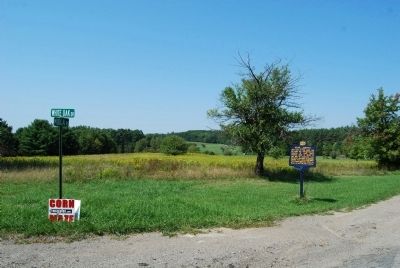 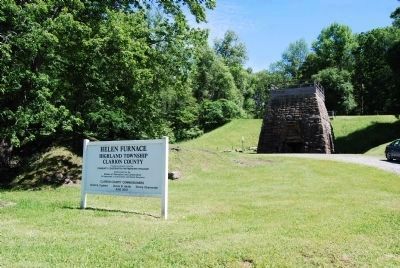 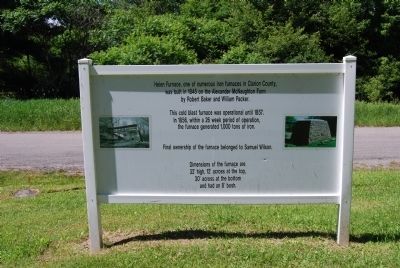 Photographed By Mike Wintermantel, June 20, 2014
4. Helen Furnace Sign Rear
Helen Furnace, one of numerous iron furnaces in Clarion County, was built in 1845 on the Alexander McNaughton Farm by Robert Baker and William Packer.

This cold blast furnace was operational until 1857. In 1856, within a 26 week period of operation, the furnace generated 1,000 tons of iron.

Final ownership of the furnace belonged to Samuel Wilson. 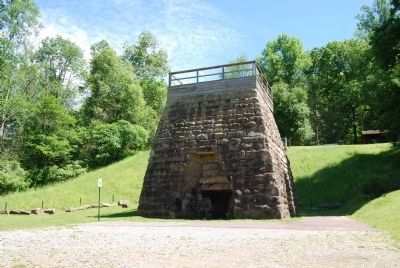 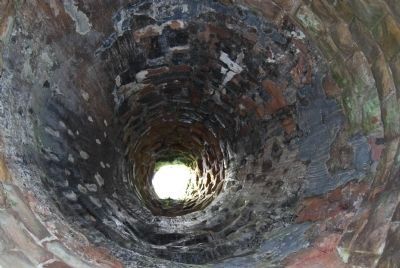 Photographed By Mike Wintermantel, June 20, 2014
6. Helen Furnace
Looking up through the chimney 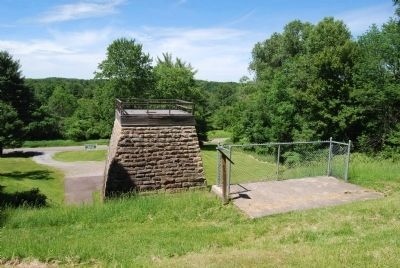 Photographed By Mike Wintermantel, June 20, 2014
7. Helen Furnace
Looking at the top from the rear. There used to be a catwalk from this point. 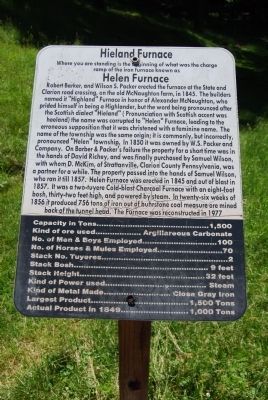 Photographed By Mike Wintermantel, June 20, 2014
8. Helen Furnace Descriptive Sign
Hieland Furnace
Where you are standing is the beginning of what was the charge ramp of the iron furnace know as
Helen Furnace
Robert Barker and William S. Packer erected the furnace at the State and Clarion road crossing, on the old McNaughton farm, in 1845. The builders named it "Highland" Furnace in honor of Alexander McNaughton who prided himself in being a Highlander, but the word being pronounced after the Scottish dialect "Hieland" (Pronunciation with Scottish accent was heeland) the name was corrupted to "Helen" Furnace, leading to the erroneous supposition that it was christened with a feminine name. The name of the township was the same origin; it is commonly, but incorrectly, pronounced "Helen" township. In 1850 it was owned by W.S. Packer and Company. On Barber & Packer's failure the property for a short time was in the hands of David Richey, and was finally purchased by Samuel Wilson, with whom D. McKim, of Strattanville, Clarion County, Pennsylvania, was a partner for a while. The property passed into the hands of Samuel Wilson, who ran it till 1857. It was a two-tuyere Cold-blast Charcoal Furnace with an eight-foot bosh, thirty-two feet high, and powered by steam. In twenty-six weeks of 1856 it produced 756 tons of iron out of buhrstone coal measure ore mined back of the tunnel head. The Furnace was reconstructed in 1977.