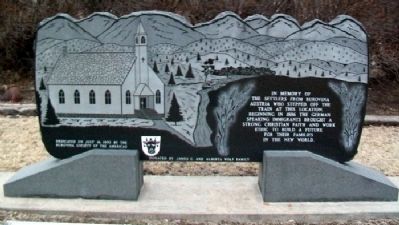 In memory of the settlers from Bukovina, Austria who stepped off the train at this location. Beginning in 1886 the German speaking immigrants brought a strong Christian faith and work ethic to build a future for their families in the New World.

Erected 1993 by Bukovina Society of the Americas and James C. and Albert Wolf Family.

Topics. This historical marker is listed in this topic list: Settlements & Settlers. A significant historical month for this entry is July 1870.

Location. 38° 56.29′ N, 99° 33.675′ W. Marker is in Ellis, Kansas, in Ellis County. Marker is on 9th Street near Jefferson Street, on the left when traveling west. Monument is in the park north of the railroad tracks. Touch for map. Marker is in this post office area: Ellis KS 67637, United States of America. Touch for directions. 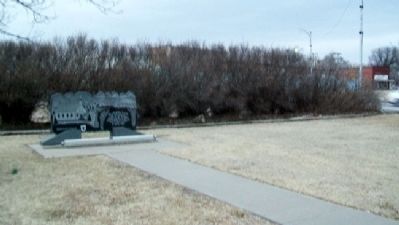 Click or scan to see
this page online
shouting distance of this marker); Praying John Horrigan (about 300 feet away, measured in a direct line); The Grand Army Hall (about 400 feet away); History of The Walter P. Chrysler Boyhood Home (about 600 feet away).