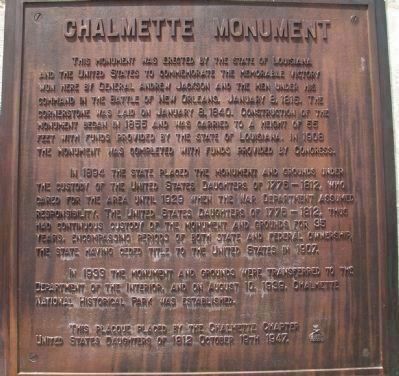 [Main Marker]:
This monument was erected by the State of Louisiana and the United States to commemorate the memorable victory won here by General Andrew Jackson and the men under his command in the Battle of New Orleans, January 8, 1815. The cornerstone was laid on January 8, 1840. Construction of the monument began in 1855 and was carried to a height of 55 feet with funds provided by the State of Louisiana. In 1908 the monument was completed with funds provided by Congress.

In 1939 the monument and grounds were transferred to the Department of the Interior, and on August 10, 1939, Chalmette National Historical Park was established. 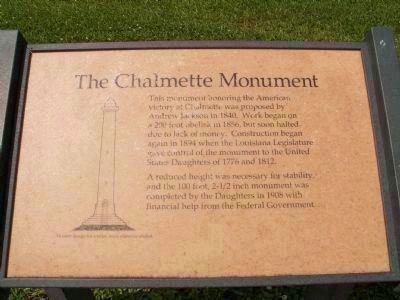 Click or scan to see
this page online
the American victory at Chalmette was proposed by Andrew Jackson in 1840. Work began on a 200 foot obelisk in 1856, but soon halted due to lack of money. Construction began again in 1894 when the Louisiana Legislature gave control of the monument to the United States Daughters of 1776 and 1812.

A reduced height was necessary for stability, and the 100 foot, 2½ inch monument was completed by the Daughters in 1908 with financial help from the Federal Government.

Topics and series. This historical marker and monument is listed in this topic list: War of 1812. In addition, it is included in the Battlefield Trails - War of 1812, the Former U.S. Presidents: #07 Andrew Jackson, and the United States Daughters of 1812, National Society series lists. A significant historical date for this entry is January 8, 1868. 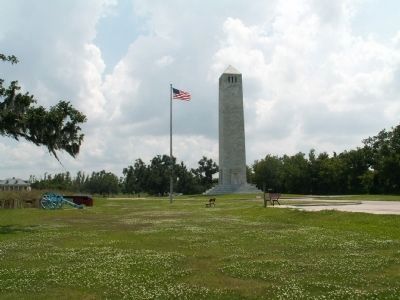 Related markers. Click here for a list of markers that are related to this marker. The Chalmette Battlefield by Markers

Photographed By Bryan Olson, May 2007
4. The battlefield, as seen from the steps of the monument 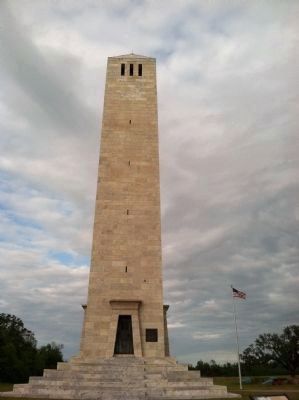 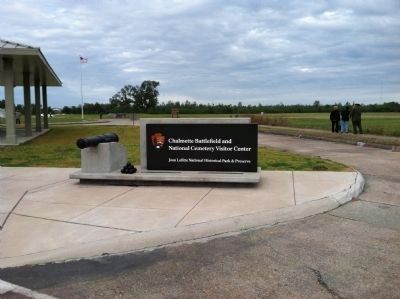