Alfred Johnson and John B. Morin 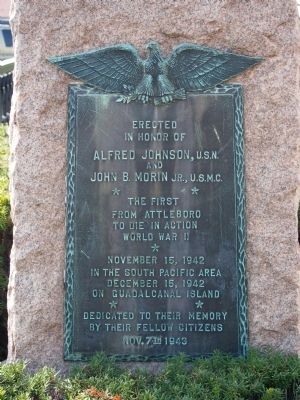 Erected in Honor of Alfred Johnson, U.S.N. and John B. Morin, U.S.M.C.
The first from Attleboro to die in action World War II
November 15, 1942 In the South Pacific area December 15, 1942 On Guadalcanal Island
Dedicated to their memory by their fellow citizens November 7th 1943

Erected 1943 by The Citizens of Attleboro.

Topics. This historical marker is listed in this topic list: War, World II. A significant historical month for this entry is November 1904.

Location. 41° 56.528′ N, 71° 16.965′ W. Marker is in Attleboro, Massachusetts, in Bristol County. Marker is at the intersection of Union Street and Mill Street, on the left when traveling north on Union Street. Touch for map. Marker is in this post office area: Attleboro MA 02703, United States of America. Touch for directions. 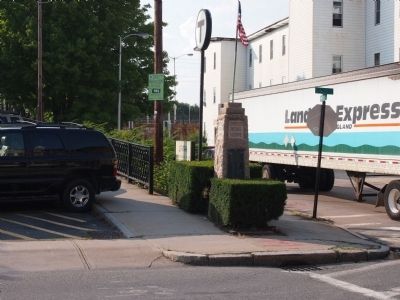