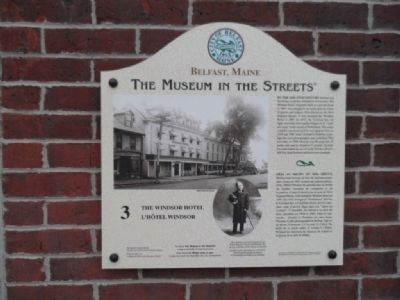 Photographed By James True, May 29, 2012
1. The Windsor Hotel Marker
Inscription.
, By the mid-19th Century Belfast was becoming a popular destination for travelers. The Windsor Hotel, originally built as a private home in 1807, was enlarged to accommodate the influx of guests and lodgers. First known as the New England House, it was renamed the Windsor Hotel in 1885. In 1935, the Colonial Inn, far right, served the first legalized liquor in its "cocktail room" at the repeal of Prohibition. The entire complex was destroyed by two separate fires in 1958 and 1960., Inset: , Donald O. Robbins is perhaps the most photographed man in Belfast. This was taken in 1908 when he was 48 years old, 45 inches tall, and he weighted 47 pounds. Despite his small stature he served as the Windsor Hotel's bell boy, head bouncer and pool room manager., . This historical marker was erected in 2004 by The Museum in the Streets®. It is in Belfast in Waldo County Maine