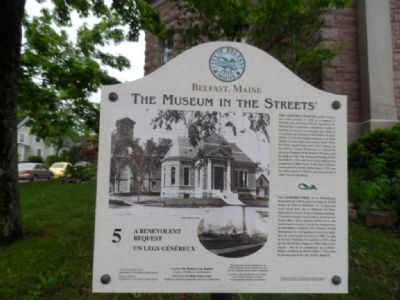 Photographed By James True, May 29, 2012
1. A Benevolent Bequest Marker
Inscription.
, The Construction of a public library was made possible in 1888 by a bequest of $20,000 from merchant Paul R. Hazeltine. He directed that a handsome, substantial, fireproof building be erected on a suitable spot. Built of red granite and trimmed with Somerville gray granite, it is the first Belfast structure to be built entirely of stone rather than wood or brick. When the library opened there were 2,033 volumes on the shelves. Joseph Williamson, Jr. (panel #6) served as President of the Board of Trustees until his death in 1902. The Grammans Reading Room was added in 1931, and a four-story addition was completed in 2000., . This historical marker was erected in 2004 by The Museum in the Streets®. It is in Belfast in Waldo County Maine