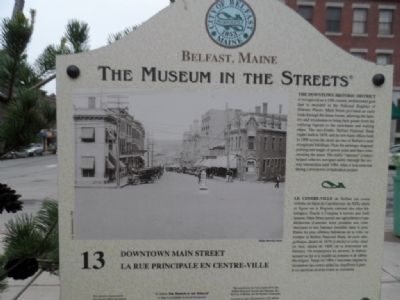 Photographed By James True, May 29, 2012
1. Downtown Main Street Marker
Inscription.
, The Downtown Historic District is recognized as a 19th century architectural gem that is included in the National Register of Historic Places. Main Street provided an early route through the dense forests, allowing the farmers and woodsmen to bring their goods from the outlying regions to the merchants and waiting ships. The neo-Gothic Belfast National Bank (right) built in 1879, and its new bank offices built in 1909 across the street are two of Belfast's most recognized buildings. Note the awnings, diagonal parking and tangle of power poles and lines criss-crossing the street. The traffic "dummy" (center) helped vehicles navigate safely through the six-way intersection until 1984, when it was removed during a downtown revitalization project., . This historical marker was erected in 2004 by The Museum in the Streets®. It is in Belfast in Waldo County Maine