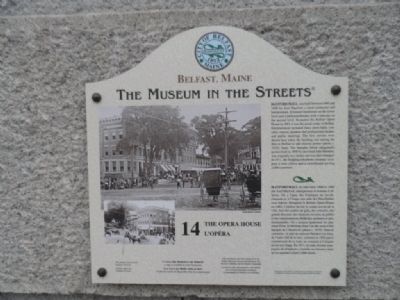 Photographed By James True, May 29, 2012
1. The Opera House Marker
Inscription.
, Hayford Hall was built between 1866 and 1868 by Axel Hayford, a local contractor and businessman. It housed businesses on the lower level and a ballroom/theater with a balcony on the second level. Renamed the Belfast Opera House in 1883, it was the social center of Belfast. Entertainment included fancy dress balls, concerts, orators, amateur and professional theater, and public meetings. The first movies were shown here when the building was among the first in Belfast to add electric power (photo c. 1910)., . This historical marker was erected in 2004 by The Museum in the Streets®. It is in Belfast in Waldo County Maine