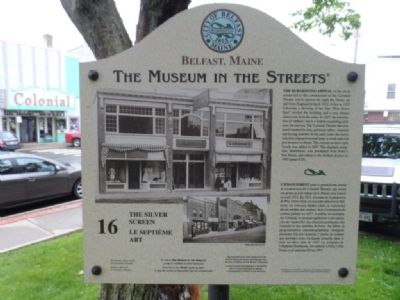 Photographed By James True, May 29, 2012
1. The Silver Screen Marker
Inscription.
, The burgeoning appeal of the silver screen led to the construction of the Colonial Theatre which opened the night the Titanic set sail from England in April 1912. A fire in 1923 following a showing of the film "Way Down East" leveled the building and a new theater (inset) rose from the ashes. In 1927, the introduction of "talkies" led to a widely expanding audience for movies. The Colonial Theatre also featured vaudeville acts, political rallies, concerts and boxing matches. In the early years, the movie selection changed several times a week and cost just pennies to attend. The current art deco style facade was added in 1947. The elephant sculpture, Hawthorne, was purchased from Perry's Nut House and added to the Belfast skyline in 1997 (panel #20)., . This historical marker was erected in 2004 by The Museum in the Streets®. It is in Belfast in Waldo County Maine