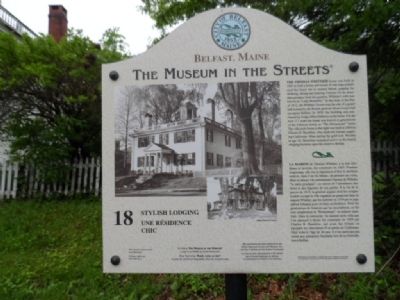 Photographed By James True, May 29, 2012
1. Stylish Lodging Marker
Inscription.
, The Thomas Whittier house was built in 1803 as both a house and tavern. It was long considered the finest inn in eastern Maine, popular for drinking, dining and dancing. Famous for the abundant produce from her gardens, Whittier's wife was known as "Lady Bountiful." At the close of the War of 18 12, the Whittier Tavern was the site of a grand ball hosted by the British general whose troops had occupied Belfast. In 1839, the building was purchased by Judge Alfred Johnson as his home. For the next 117 years the house was known to generations of the Johnson family as "The Homestead.", . This historical marker was erected in 2004 by The Belfast Historical Society and Museum, Inc., The City of Belfast, and the Belfast Community. It is in Belfast in Waldo County Maine