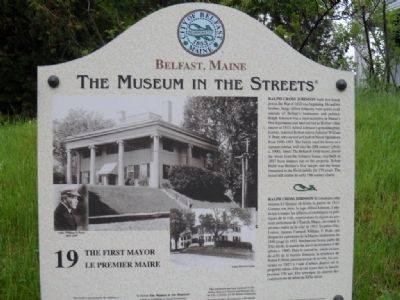 Photographed By James True, May 29, 2012
1. The First Mayor Marker
Inscription.
, Ralph Cross Johnson built this house just as the War of 18 12 was beginning. He and his brother, Judge Alfred Johnson, were active in all manner of Belfast's businesses and politics. Ralph Johnson was a representative in Maine's first legislature and later served as Belfast's first mayor in 1853. Alfred Johnson's granddaughter, Louise, married Belfast native Admiral William V. Pratt, who served as Chief of Naval Operations from 1930-1933. The family used the house as a summer retreat, well into the 20th century (photo c. 1900)., . This historical marker was erected in 2004 by The Museum in the Streets®. It is in Belfast in Waldo County Maine