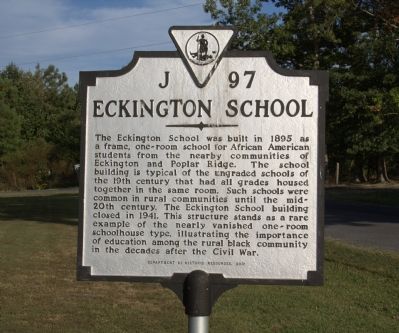 Photographed By J. J. Prats, September 15, 2012
1. Eckington School Marker
Inscription.
Eckington School. . The Eckington School was built in 1895 as a frame, one-room school for African American students from the nearby communities of Eckington and Poplar Ridge. The school building is typical of the ungraded schools of the 19th century that had all grades housed together in the same room. Such schools were common in rural communities until the mid-20th century. The Eckington School building closed in 1941. This structure stands as a rare example of the nearly vanished one-room schoolhouse type, illustrating the importance of education among the rural black community in the decades after the Civil War. . This historical marker was erected in 2001 by Department of Historic Resources. It is Near Culpeper in Culpeper County Virginia

The Eckington School was built in 1895 as a frame, one-room school for African American students from the nearby communities of Eckington and Poplar Ridge. The school building is typical of the ungraded schools of the 19th century that had all grades housed together in the same room. Such schools were common in rural communities until the mid-20th century. The Eckington School building closed in 1941. This structure stands as a rare example of the nearly vanished one-room schoolhouse type, illustrating the importance of education among the rural black community in the decades after the Civil War.

Topics and series. This historical marker is listed in these topic lists: African Americans • Education. In addition, it is included in the Virginia Department of Historic Resources series list. A significant historical year for this entry is 1895. 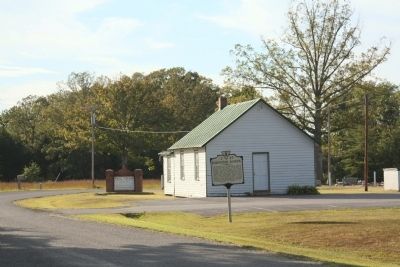 Click or scan to see
this page online
is at or near this postal address: 21649 Mt Pony Rd, Culpeper VA 22701, United States of America. Touch for directions.

Regarding Eckington School. Poplar Ridge Baptist Church, later called Free Union, in was founded here in 1879. The school was built next to the church. Today the schoolhouse belongs to the church.

Also see . . .  December 2000 National Register of Historic Places Registration Form. Excerpt.
Located 3 miles north of the Rapidan River in south-central Culpeper County, the Eckington School is the only one-room public school for black students in Culpeper County still standing in its original location and preserving its original appearance. This vernacular frame structure was built in 1895 as a segregated school for pupils in the nearby communities of Eckington and Poplar Ridge. In form and finish, the building is typical of the ungraded schools of the nineteenth century, which had all grades housed together in the same room. Such schools were a once common form of rural 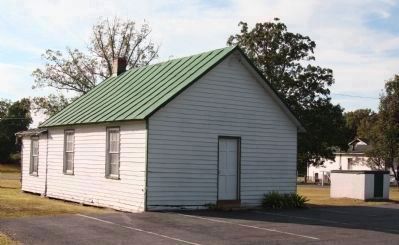 Photographed By J. J. Prats, September 15, 2012
3. The Eckington School
school in the era before Virginia adopted standard plans for school buildings beginning in the early twentieth century. The Eckington School continued in operation until 1941, when Culpeper County consolidated its public school system. This humble little structure stands both as a rare example of a nearly-vanished schoolhouse type, and as a monument to the importance of education among the rural black community in the decades after the Civil War. It is eligible for listing in the National Register for its associations both with this significant aspect of black history and with the history of education in Virginia.

The lot upon which the Eckington School stands was conveyed to the Trustees of Culpeper County’s Cedar Mountain School District by Patrick and Margaret Maloney in 1892. The school building was completed and opened in 1895 as a segregated public school for black children in the neighborhood. As with numerous other rural Virginia schools, the Eckiigton School was located near an established neighborhood landmark—in this case, the Free Union Baptist Church.

The school takes its name from the nearby Eckington Post Office. The post office, which was attached to general store and blacksmith shop, first opened February 1, 1892, and closed September 1906. The post office reopened a mile north of its first location on December 22, 1914, and closed permanently on January 3 1, 1941. Like the first post office, it was attached to a general store, which also closed shortly afterwards. The school was alternately known as the Poplar Ridge 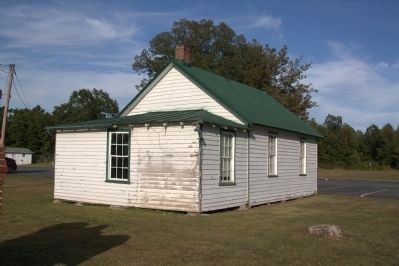 Photographed By J. J. Prats, September 15, 2012
4. Rear View of the Eckington School
The addition was added in 1950.
School after the Poplar Ridge community west of Eckington. (The Free Union Baptist Church was originally organized in 1879 as Poplar Ridge Church, changing to the present name several years afterward.)
[. . .]
The Eckington School was representative of several important trends of its era. As a segregated school, it was part of the system of that separated school children by race, as was required by law. Numerous small local schools such as Eckington were a necessity for another reason, filling the need for education in sometimes-isolated rural communities in an era before effective all-weather transportation and roads. In addition, some schoolhouses such as the Eckington School were part of a statewide push to upgrade school buildings and equipment; particularly targeted for elimination were the cheap but crude log buildings that had previously marked many country schools. In the reports for the school years 1895-96 and 1896-97, the Superintendent of Public Instruction noted that the “consolidation of schools is not practiced in many areas unless means of transporting students can be found.” Additionally, he stated, “During the past few years there has been decided improvement in schoolhouses and equipment, but the log schoolhouse has not entirely disappeared. I recommend that the Board of Education be authorized to furnish the counties suitable designs and specifications for schoolhouses.”

Despite such recommendations, standard plans for schools only appeared in Virginia after the passage of the Williams Building Act in 1906. This legislation, along with the subsequent Strode Act of 1908, and a later act in 1916, appropriated loan funds for enlargement or repair of old schools and construction of new ones. The State Board of Education made available 16 different schoolhouse plans and specifications free of charge. These included two, three, four, six and eight room plans.

In contrast to these twentieth century standard plans, the Eckington School belongs to an earlier era before standardization. Its one room plan is typical of the ungraded schools of the nineteenth century, with all grades housed in a single room. No builder has been identified for the Eckington School. As was typical in many parts of Virginia, it is possible that the school district hired a local builder to construct the building; it is also possible that members of the community contributed labor and materials.

In 1941, Culpeper County consolidated its public school system, and the Eckington School was closed. The elementary school students were sent to school at Brandy, some six miles north of the Eckington School; older students (up to the 9th grade) were sent to the Culpeper Training Center near the town of Culpeper (later expanded into the George Washington Carver Training Center). This consolidation necessitated busing the students to their new schools. While the Eckington School had been in operation, it had only served the immediate neighborhood, all its students had walked to school, with no buses deemed necessary. Interestingly, after the outbreak of the war a few months later, consolidation of rural schools, which were usually attended by the need to bus the students to the new location, was being discouraged as an inefficient use of resources, especially fuel.

The old Eckington School building subsequently was used as a church hall by the neighboring Free Union Baptist Church. The small shed room was added ca. 1950 to house kitchen facilities. Since a larger church hall was added to Free Union Church in 1987, the old school building has been used for storage. The Eckington School remained in the ownership of the Culpeper County School Board until 1990, when old school building and lot were formally deeded to the trustees of the Free Union Baptist Church. The congregation is currently planning to stabilize and restore the old school building as a site for historical exhibits on the school and community. (Submitted on September 15, 2012.)
Credits. This page was last revised on October 14, 2016. It was originally submitted on September 15, 2012, by J. J. Prats of Powell, Ohio. This page has been viewed 541 times since then and 49 times this year. Photos:   1, 2, 3, 4. submitted on September 15, 2012, by J. J. Prats of Powell, Ohio.