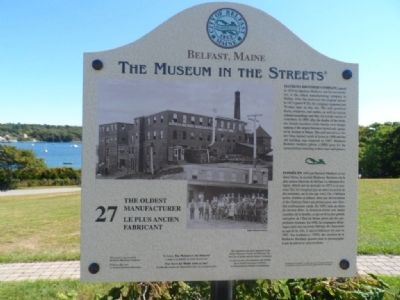 Photographed By James True, September 1, 2012
1. The Oldest Manufacturer Marker
Inscription.
, Mathews Brothers Company, started in 1854 by Spencer Mathews and his two brothers, is the oldest manufacturing company in Belfast. After fire destroyed the original factory in 1873 (panel #24), the company reopened just 70 days later on this site. The mill produced doors, windows, and sashes, as well as custom ordered mouldings and trim, for a wide variety of customers. In 1899, after the deaths of the brothers, female members of the family took charge, making it the largest business owned and operated by women in Maine. The mill moved to a former shoe factory south of town in 1988 and the old building was removed in 1997. Mathews Brothers workers (photo c. 1890) pose for the camera before returning to their saws and planers., . This historical marker was erected in 2004 by The Museum in the Streets®. It is in Belfast in Waldo County Maine