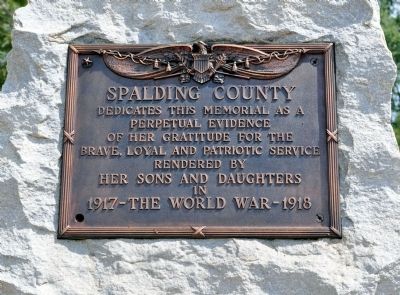 Spalding County
Dedicates this memorial as a perpetual evidence of her gratitude for the brave, loyal and patriotic service rendered by
Her Sons and Daughters
in
1917 – The World War - 1918

In memory of our Doughboys who lost their lives during the Great War.

Topics and series. This historical marker is listed in this topic list: War, World I. In addition, it is included in the Spirit of the American Doughboy - E. M. Viquesney series list. 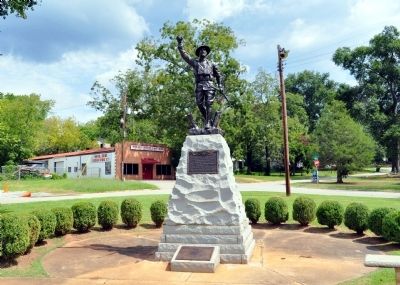 By David Seibert, September 16, 2012
2. Spalding County Marker
N, 84° 15.217′ W. Marker is in Griffin, Georgia, in Spalding County. Marker is at the intersection of 1st Street and East Taylor Street, on the left when traveling north on 1st Street. The monument stands in Veterans Memorial Park. Touch for map. Marker is in this post office area: Griffin GA 30223, United States of America. Touch for directions.

More about this marker. The monument was originally located at Hill and Taylor Streets in downtown Griffin. It was moved a short distance in 1950, then in 1957 was moved to its present location when Veterans Memorial Park was established.

Regarding Spalding County. The statue of the "Doughboy" lost its left hand and the rifle and bayonet in 1993, from exposure to the elements. The missing pieces were replaced.

Also see . . .
1. Griffin, Ga. Doughboy::. This website also contains information on all known Viquesney Doughboys (there are about 140 of them throughout the U.S.); however the link refers only to the one at Griffin, Georgia. (Submitted on September 25, 2012, by Al Wolf of Veedersburg, Indiana.) 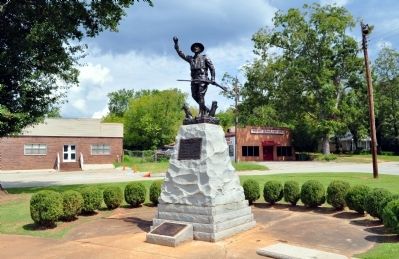 2. "The History behind the Doughboy" ::. (Courtesy:: Karen Gardnerl in Emmitsburg, Maryland, Area Historical Society publication.) Originally published in 1991 this link gives a good history and other links - well worth the search and read. (Submitted on September 25, 2012, by Al Wolf of Veedersburg, Indiana.)

3. Who are "Doughboy" Searchers??::. This web site gives more detailed history, photos, and items. Also examples of other Viquesney works of Historical Art. (Submitted on September 25, 2012, by Al Wolf of Veedersburg, Indiana.) 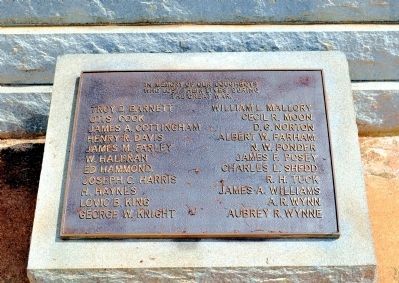 By David Seibert, September 16, 2012
4. The Plaque Naming the Spalding County Dead in World War One 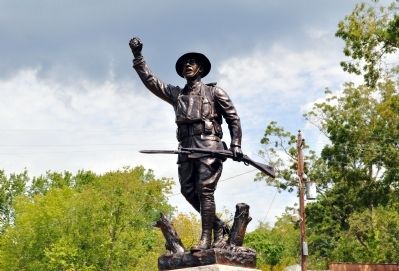