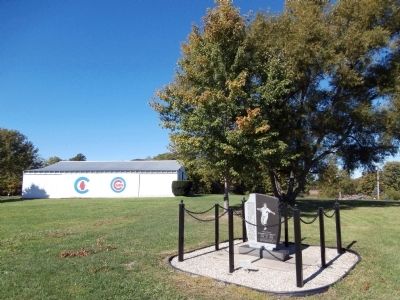 Born in this Mining Community of Nyesville, Indiana.

The first Indiana player inducted into the
Baseball Hall of Fame

A farm accident mangling his right hand at age 7 was the
cause for his Major League Nickname:
“Three Finger Brown”

Mordecai’s 1911 contract with the 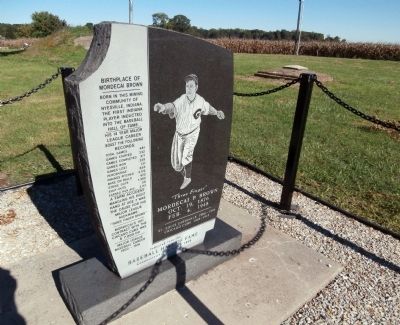 Inducted into the Baseball Hall of Fame
Cooperstown, New York –– 1949

First Indiana baseball player inducted into the Baseball Hall of Fame. Born to Peter and Lula Day Brown, immigrants of English and Welsh descent, in the coal mining community of Nyesville, Indiana. Mort, as his family and friends called him, was a victim of an accident at age 7. He caught his right hand in a corn grinder on his uncle’s farm losing his forefinger, part of his little finger and mangling his middle finger. This accident was the cause of his Major League Nickname.

Mordecai played third base and other positions in nearby communities known as “Minor Brown”. Earning his way to the Big Leagues at age 19 Mordecai first played with the St. Louis Cardinals in 1903. The condition of his twisted and mangled hand enabled him to throw a spin curve with a nasty break. From this Mordecai was known as “Three 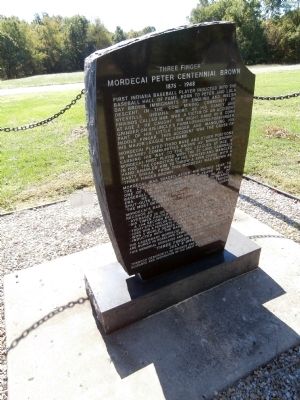 Mordecai was traded after his Rookie Year to the Chicago Cubs. The next 9 years he was one of the most dominant pitchers in all of baseball during the “Tinker to Evers to Chance” era. He was the first to pitch 4 straight shut-outs in 1908. Ty Cobb called Brown’s curve “the most devastating pitch I ever faced.”

Mordecai’s baseball career embraced such records as:
— Averaged 20 or more wins per season
— Six times posted ERA’s under 2.00 including a 1.04 second best of All Time in 1906
— Today still holds the Chicago Cub ERA record of 1.80
— Cubs won 4 Pennants in 5 seasons with Brown pitching
— Won 5 World Series Games
— Inducted into the Baseball Hall of Fame in 1949

The legendary Mordecai Brown and his wife Sarah are buried in Roselawn Cemetery, Terre Haute, Indiana.

This memorial dedicated and erected to the memory of
“Three Finger Brown”
July 9, 1994
through generosity of friends and neighbors with guidance and inspiration of his Great Nephew
Fred Massey.

Erected 1994 by Generosity of Friends and Neighbors, Guidance and Inspiration of His Great Nephew Fred Massey. 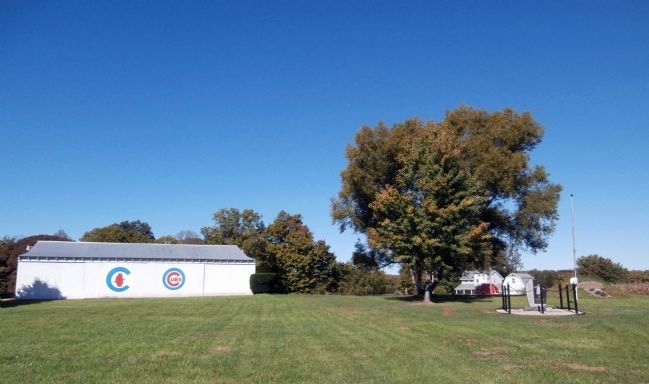