The Birthplace of the Petroleum Industry 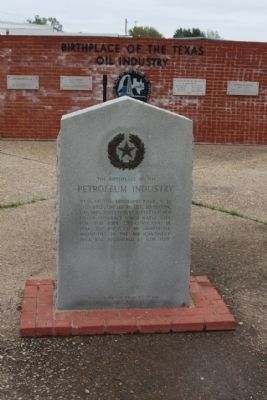 By Mike Stroud, September 15, 2012
1. The Birthplace of the Petroleum Industry Marker
Inscription.
The Birthplace of the Petroleum Industry. .
West of the Mississippi River, in this well, drilled by H. G. Johnston, E. H. Akin, and Charles Rittersbacher under contract for a water well for the city of Corsicans in 1894, the first oil in commercial quantities in the mid-continent area was discovered at 1035 feet. . . This historical marker was erected in 1936 by State of Texas. It is in Corsicana in Navarro County Texas

West of the Mississippi River, in
this well, drilled by H. G. Johnston,
E. H. Akin, and Charles Rittersbacher
under contract for a water well
for the city of Corsicans in
1894, the first oil in commercial
quantities in the mid-continent
area was discovered at 1035 feet.

Topics and series. This historical marker is listed in this topic list: Industry & Commerce. In addition, it is included in the Texas 1936 Centennial Markers and Monuments series list. A significant historical year for this entry is 1894.

Other nearby markers. At least 8 other markers are within walking distance of this marker. First Commercial Oil Discovery in Texas (here, next to this marker); Magnolia Cannon (a few steps from this marker); Birthplace of the Texas Oil Industry 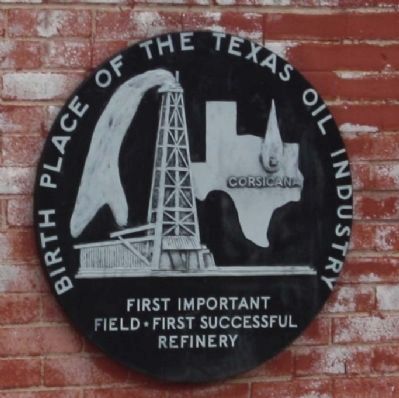 By Mike Stroud, September 15, 2012
2. The Birthplace of the Texas Oil Industry Medallion

In the Spring of 1894 the Corsicana Water Development Company 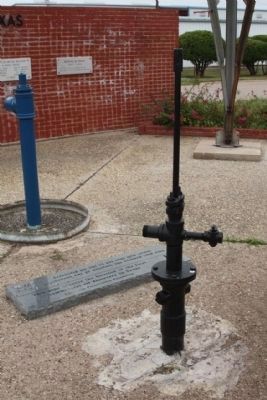 By Mike Stroud, September 15, 2012
3. The Birthplace of the Petroleum Industry Marker
This pipe denotes the location of the first commercial oil discovery in Texas
contracted Horace G. Johnson, Elmer H. Akin, and Charles Rittersbacher to drill a water well on South 12th Street about a block south of the Cotton Belt Railroad tracks. Drilling was done by a cable tool rig.

On June 9, 1894, a layer of oil sand was struck at a depth of 1,035 feet. The Corsicana Oil Field Discovery Well produced unneeded results for the drillers, because the oil had to be cased off to keep it from contaminating warm artesian water, which was finally found at 2,470 feet. However, oil continued to seep up from the ground around the casing.

When the oil was struck at 1,035 feet, samples were extracted and sent to the Standard Oil Company in Pennsylvania for tests. The oil was found to be of good quality.

The Corsicana Oil Field covers an area about five miles by two miles. Some of the best producing wells in this field were located on the eastern edge of Corsicana and had a daily output of forty-five barrels each.

Today, the 1894 Corsicana Oil Field Discovery Well is well preserved in the Petroleum Industry Park. The discovery well consists of a 6 inch pipe rising 3 feet out of the ground. The well site has been bricked to protect the pipe. The head of the well is capped and would reportedly flow by its own pressure if the cap were removed. 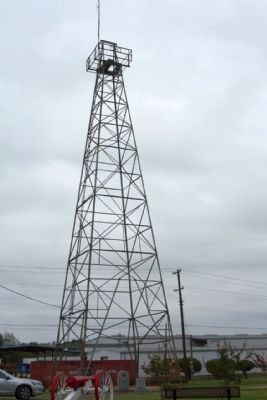 By Mike Stroud, September 15, 2012
4. The Birthplace of the Petroleum Industry Marker, bottom center
this field gave oil development in Texas its impetus.

In the early 1890's, Corsicana, Texas needed a better water system. As a result, in 1894 the Commercial Club of Corsicana discussed means of solving the water shortage. After a meeting, the Corsicana Water Development Company was incorporated by James L. Autry, Charles Allyn, and James Garrity and contracted the American Well and Prospecting Company (Horace G. Johnson, Elmer H. Akin and Charles Rittersbacher) to drill a water well on South Twelfth and West Ninth Streets. Using the cable tool method the drilling was started in the spring of 1894.

On the morning of June 9, 1894, a layer of oil sand was struck at 1,035 feet. This discovery infuriated the drillers because it meant that casing would have to be placed in the hole to seal off the oil formation. After repeated attempts to stop the oil from seeping around the casing, local speculators realized that the oil deposits might have some commercial significance.

The Corsicana Oil Development began leasing land in the vicinity of the new, city artesian well. John H. Galey and J. M. Guffey were contracted by the new oil company to drill five wells for an undivided one-half interest in all gas and oil found. Two hundred feet south of the city's well, oil was struck at 1,030 feet which produced two and one-half barrels a day. The third, fourth, and fifth wells produced 22, 20, and 25 barrels respectively. Soon afterward wells and derricks sprang up all over the eastern part of Corsicana.

As oil reserves accumulated, local citizens saw the need to market the bountiful, Corsicana oil. Joseph S. Cullinan of the Standard Oil Company was approached with the proposition of building a refinery in Corsicana to distill the crude oil into a marketable item.

Until 1890 cable tool rigs were the only machines being used. M.C. and C.E. Baker, brothers from South Dakota, had been experimenting with a simple rotary rig in which water was forced down the drill stem instead of forcing water down the outside of the pipe which caused mud and drilling debris to circulate up the stem of the pipe. Upon hearing of the oil discovery in Corsicana the brothers departed for Texas. In Corsicana they perfected the rotary rig for oil well drilling, the basic type used today in virtually all oil well drilling.

At about the same time, Johnson, Akins, and Rittersbacher, original drillers of the Corsicana water well that started the Corsicana oil field, had been drilling water and oil wells. Since there were no repair shops for oil equipment west of St. Louis, the partners invested in a blacksmith and repair shop. Johnson, Akins, and Rittersbacher, American Well and Prospecting Company, hired the Baker brothers and eventually put an improved rotary rig on the market in 1901.

During this same period, J. S. Cullinan developed one of the first locomotives to use oil products for fuel and instigated the use of oil on dirt streets in Corsicana to prevent dust from rising due to traffic.

The early Corsicana Oil Field led to the use of rotary rigs and added markets for oil. From these developments, especially that of the rotary rig and associated equipment, the technology was available for the subsequent exploitation of the great Spindletop Oil Field near Beaumont, Texas in 1901.

Although it is less familiar to the public than the later, larger fields in Texas, such as the Spindletop Field, East Texas Oil Field, and the Permian Basin Field, the Corsicana Oil Field was the first large field west of the Mississippi River and provided the technology which made later fields possible.