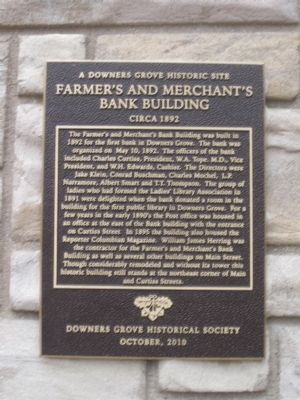 The Farmer's and Merchant's Bank Building was built in 1892 for the first bank in Downers Grove. The bank was organized on May 10, 1892. The officers of the bank included Charles Curtiss, President, W.A. Tope, M.D., Vice President, and W.H. Edwards, Cashier. The Directors were Jake Klein, Conrad Buschman, Charles Mochel, L.P. Narramore, Albert Smart and T.T. Thompson. The group of ladies who had formed the Ladies' Library Association in 1891 were delighted when the bank donated a room in the building for the first public library in Downers Grove. For a few years in the early 1890's the Post office was housed in an office at the east end of the Bank building with the entrance on Curtiss Street. In 1895 the building also housed the Reporter Columbian Magazine. William James Herring was the contractor for the Farmer's and Merchant's Bank Building as well as several other buildings on Main Street. Though considerably remodeled and without its tower this historic building still stands at the northeast corner of Main and Curtiss Streets.

Topics. This historical marker is listed in these topic 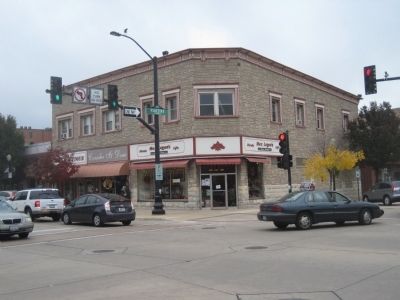 Click or scan to see
this page online
lists: Arts, Letters, Music • Industry & Commerce. A significant historical month for this entry is May 1816.

Other nearby markers. At least 8 other markers are within 6 miles of this marker, measured as the crow flies. Main Street Cemetery (about 400 feet away, measured in a direct line); a different marker also named Main Street Cemetery (about 400 feet away); Masonic Temple (about 600 feet away); The Indian Boundary Line (approx. ¼ mile away); Ben Fuller House (approx. 4.7 miles away); Get Your "Chicks" on Rte 66 (approx. 4.9 miles away); Dell Rhea's Chicken Basket (approx. 4.9 miles away); Mammoth Spring (approx. 5.2 miles away). Touch for a list and map of all markers in Downers Grove.
Credits. This page was last revised on June 16, 2016. It was originally submitted on October 5, 2012. This page has been viewed 431 times since then and 26 times this year. Photos:   1, 2. submitted on October 5, 2012. • Bill Pfingsten was the editor who published this page.
Share this page.