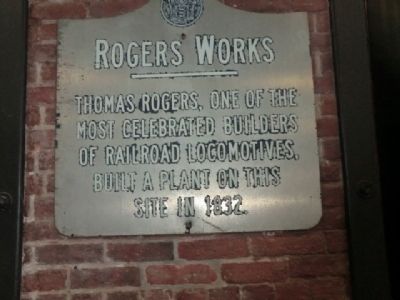 By Don Morfe, March 3, 2012
1. Rogers Works Marker
Inscription.
Rogers Works. . Thomas Rogers, one of the most celebrated builders of railroad locomotives, built a plant on this site in 1832 . This historical marker is in Paterson in Passaic County New Jersey

Thomas Rogers, one of the most celebrated builders of railroad locomotives, built a plant on this site in 1832

Topics. This historical marker is listed in this topic list: Railroads & Streetcars. A significant historical year for this entry is 1832.

Location. 40° 54.822′ N, 74° 10.752′ W. Marker is in Paterson, New Jersey, in Passaic County. Marker is on Market Street. The Roger Works is on the grounds of the Paterson Museum. Touch for map. Marker is at or near this postal address: 2 Market Street, Paterson NJ 07501, United States of America. Touch for directions. 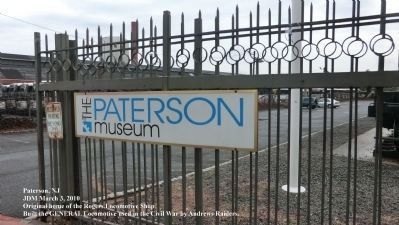 Click or scan to see
this page online
(about 500 feet away); Great Falls of the Passaic/S.U.M. Historic District (about 600 feet away). Touch for a list and map of all markers in Paterson. 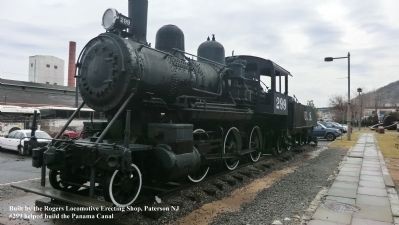