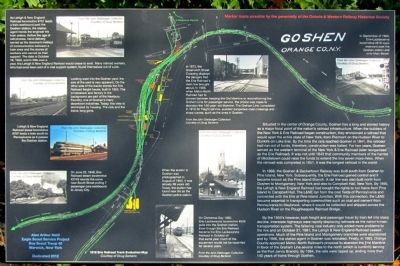 Situated in the center of Orange County, Goshen has a long and storied history as a major focal point of the nation's railroad infrastructure. When the builders of the New York & Erie Railroad began construction, they envisioned a railroad that would span the entire state of New York, from Piermont on the Hudson River to Dunkirk on Lake Erie. By the time the rails reached Goshen in 1841, the railroad had run out of funds, therefore, construction was hailed. For two years, Goshen . served as the western terminal of the New York & Erie Railroad (later reorganized as the Erie Railroad). It was not until 1843 that community members of the hamlet of Middletown could raise the funds to extend the line seven more miles. When the railroad was completed in 1851. it was the longest railroad in the world.

In 1868, the Goshen & Deckertown Railway was built south from Goshen to Pine Island, New York. Subsequently, the Erie Railroad gained control and it became known as the Pine Island Branch. A rail line was also built north from Goshen to Montgomery. New York and also to Campbell Hall, New York. By 1895. the Lehigh & New England Railroad had bought 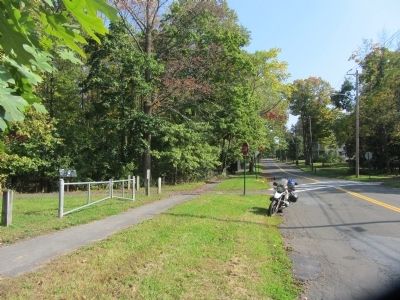 By Clifton Patrick, October 5, 2012
2. Looking west up Green Street. Goshen, Orange Co., N.Y. marker visible left of crossing.
the rights to run trains from Pine Island to Campbell Hall. The L&NE ran from the coal fields of Pennsylvania and connected with the Erie at Pine Island Junction. With this connection. the L&NE became essential in transporting commodities such as coal and cement from Pennsylvania to Maybrook, where it would be collected and shipped across the Hudson River on the Poughkeepsie Railroad Bridge.

By the 1950s however, both freight and passenger travel by train fell into steep decline. Interstate highways were rapidly displacing railroads as the nation's main transportation system. The faltering coal industry only added more problems to the mix and on October 31, 1961, the Lehigh & New England Railroad ceased operations. Much of the Pine Island and Montgomery branches were abandoned and by 1966, the station agent in Goshen was relocated. Finally, in 1983, Orange County approved Metro-North Railroad's proposal to abandon the Erie Mainline in favor of the Graham Line several miles to the north (which is currently serving as the Port Jervis Branch). By 1984, the rails were ripped up, ending more than 140 years of trains through Goshen.

[photo captions]
As Lehigh & New England Railroad locomotive #701 leads a train eastbound past the Goshen station, the station agent hands the engineer his train orders. Before the age of cell phones, hand delivery served as the dominant method of communication between a train crew and the scores of workers who served as their support. The date is October 16, 1960, and in little over a year, the Lehigh & New England Railroad would cease to exist. Many railroad workers, who had once been part of a vital support system, found themselves out of a job.
From the John Stellwagen Collection Courtesy of Doug Barberio

Looking west into the Goshen yard, the size of the yard is very apparent. On the other side of the tracks stands the Erie Railroad freight house, built in 1905. The smokestack and factory in the background are part of the Newbury Foundry, one of Goshen's many downtown industries. Today, this view is dominated by housing. The rails and the trains; long gone.
From the John Stellwagen Collection Courtesy of Doug Barberio

In 1973, the Greenwich Street Crossing displays the dangers that the Erie Railroad's main line brought about. In 1983, when Metro-North Railroad had to choose between keeping the Old Mainline or reconditioning the Graham Line for passenger service, the choice was made to abandon the 140-year-old Mainline. The Graham Line, completed in 1910 for freight service, avoided dangerous road crossings and sharp curves, such as the ones in Goshen.
From the John Stellwagen Collection Courtesy of Doug Barberio

When the station in Goshen was photographed in August of 1965. it was already 99 years old. Today, the station has found new life as the Goshen police station.
From the John Stellwagen Collection Courtesy of Doug Barberio

On Christmas Day 1960, Erie-Lackawanna locomotive #829 pulls into the Goshen station. Even though the Erie Railroad became the Erie-Lackawanna Railroad in October of that same year, much of the equipment would not be repainted for several years.
From the John Stellwagen Collection Courtesy of Doug Barberio


In September of 1964, Erie-Lackawanna locomotive #816 roars eastward past the Goshen station and onto Main Street.
From the John Stellwagen Collection Courtesy of Doug Barberio

More about this marker. Marker is on the Orange Heritage Trail, just off Green Street at the crossing.